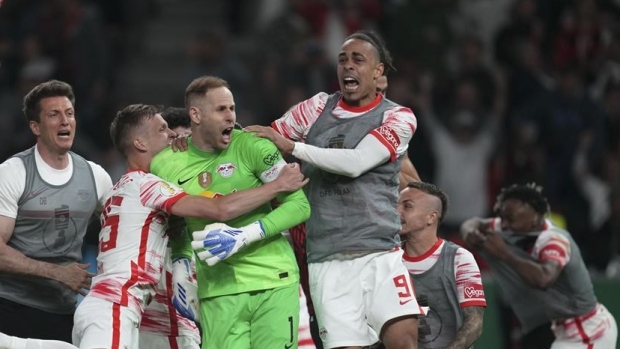 BERLIN (AP) — Ten-man Leipzig came from a goal down in the German Cup final to beat Freiburg 4-2 on penalties for the club’s first trophy in its short history on Saturday.

Christopher Nkunku equalized in the 76th minute for 1-1 in normal time, sending the game to extra time, then penalties, where Freiburg captain Christian Günter and Ermedin Demirovic both missed. Demirovic, who struck the post in extra time, crashed his effort off the crossbar.

“It fit with the way the game went,” Freiburg coach Christian Streich said.

Maximilian Eggestein fired Freiburg ahead in the 18th minute and Leipzig’s chances of a comeback were dented when Marcel Halstenberg was sent off for pulling back Lucas Höler when the Freiburg forward would have been through on goal.

“When we were leading and there was the red card, then we had something to lose. We played one or two passes too long,” Streich said.

Nkunku popped up with Leipzig’s vital equalizer, squeezing the ball in at the near post after Freiburg failed to properly clear a free kick.

“I'm more than happy, so proud of the team,” said Leipzig coach Domenico Tedesco, who was interrupted during his post-game news conference when his players burst in and doused him in beer.

There was a lengthy hold up before the award ceremony due to what the stadium announcer said was a “medical emergency.” Fans held up the lights on their phones around the stadium as first responders attended to the stricken man. He was taken away by ambulance after the announcer said he was stable. Fans responded with applause, and the ceremony resumed.

It’s Leipzig’s first title since its formation in 2009. The club lost the final last year to Borussia Dortmund and in 2019 to Bayern Munich.

It was also the first German Cup final to be played with fans present since 2019. The coronavirus pandemic meant German soccer’s end-of-season showpiece was played in an empty stadium the previous two years. More than 74,000 attended Saturday’s final at Berlin’s Olympiastadion.

Freiburg fans were urged many times to desist from lighting pyrotechnics. They ignored the pleas. Leipzig supporters later followed their example.

Freiburg twice hit the post and once the crossbar in extra time, while Demirovic also fired a rebound over the unguarded net.

It was the first final in 11 years without either Bayern or Dortmund. Bayern was knocked out in the second round with an embarrassing 5-0 loss at Borussia Mönchengladbach and defending champion Dortmund lost in the third round at second-division St. Pauli 2-1.

A giant peace sign was displayed in the middle of the field before kickoff, a reference to Russia’s invasion of Ukraine.