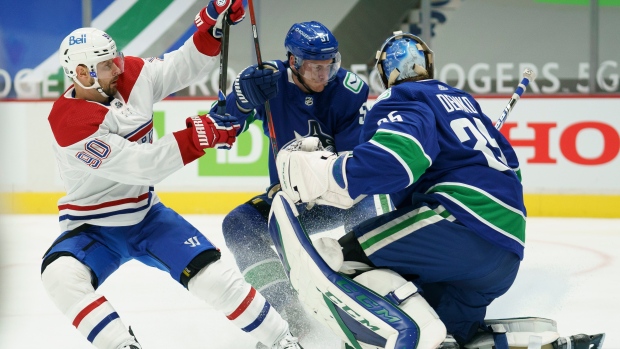 Players and coaches across the NHL have talked a lot about embracing change and new normals in this most unusual of seasons.

The COVID-19 pandemic brought with it an abbreviated schedule, realigned divisions, a host of consecutive games between the same two teams, and no fewer than 213 pages of health and safety protocols.

Play on the ice remains largely unchanged, save for the empty, fan-less arenas in most markets, including all seven in Canada. But with clubs facing just six or seven regular-season opponents to cut down on travel and reduce the risk of coronavirus exposure, there's going to be a lot of familiarity between rivals — and quick.

With the way coaching staffs now splice and study video in search of any kind of edge or tendency, the ability to subtly — and successfully — tweak systems or be unpredictable could mean a few extra victories in a year where points are at a premium and playoff margins have the potential to be razor-thin.

That might include varied setups on the power play and penalty kill or adding wrinkles to zone entries, faceoffs and breakouts in hopes of keeping the other side guessing.

"It's going to be a constant back and forth," Toronto Maple Leafs centre Auston Matthews said. "Teams are going to make adjustments, they're going to watch video, you're going to play them two days later. (Then) play them a day later ... adjustments.

"It's a little more of a playoff mindset ... there's subtle adjustments you make," he said. "Sometimes you get into the regular season, games flow into each other. Every game is going to be so important. You know you're going to have rivals all the way across and the competition is going to be stiff.

"Coaches are really going to dig in, too. It's going to push coaches to be better."

Leafs forward Jason Spezza, in his 18th NHL season and described as a "hockey nerd" by teammates, said he's looking forward to seeing the game-to-game chess matches play out.

"Special teams will probably be the biggest area where you see," he said. "You'll have to give different looks."

Leafs coach Sheldon Keefe said making in-game adjustments could become easier unless approaches are modified from time to time as opponents face each other up to 10 times.

"You know what's coming or there's certain triggers that you're looking for," he said. "That stuff all becomes factors. Those are all very, very unique pieces in this season that you don't get in a normal regular season."

Montreal Canadiens coach Claude Julien pointed out teams that win the first meeting of a two- or three-game set will have to ponder changes, knowing the other side is undoubtedly scrambling for answers.

"You have to be ready to be flexible," he said. "You also have to be ready to understand that just because you win one night, it's going to get tougher the second night and maybe even the third night. The more you play against teams consecutively, the tougher it gets."

"Just because you won on Tuesday doesn't mean Wednesday's going to be the same outcome," he said. "It's a matter of being adaptable. It's a bit different for all of us, playing against the same teams so much, but it's a chance to learn about other players and teams.

"We have to be willing to change what we're doing."

But Winnipeg Jets centre Paul Stastny said there's only so much teams can tweak. It's often all about reading on the fly.

"Everyone is predictable," he said. "It's a cookie cutter league, but because the game happens so fast, a lot of it is reactionary. You look at so many goals and none of it happens just from the way you drew up a play. Most of it is just a guy really making the play happen and all of a sudden a second guy, third guy all falls in line."

Philadelphia Flyers coach Alain Vigneault made the point teams will have to be careful not to stray too far from their core beliefs, structure or framework.

"There's going to be a fine line there between playing to your strengths, playing to your identity, and sometimes adding a little wrinkle in there that might throw the opposition off," he said. "In today's game, teams really do their homework."

"You wouldn't want to go and change your whole system from game to game," Vancouver Canucks head coach Travis Green added. "But there are different things — faceoff plays, special teams, certain things that you can change from night to night — that maybe a pre-scout wouldn't show."

"They've got to see something different," Maurice said. "(But) you've got to be real careful about how many times you're gonna change your grip on your golf club, because you're gonna get a different trajectory every time.

"Play well, play hard, but you're gonna have to be fairly creative in the way you approach the game."