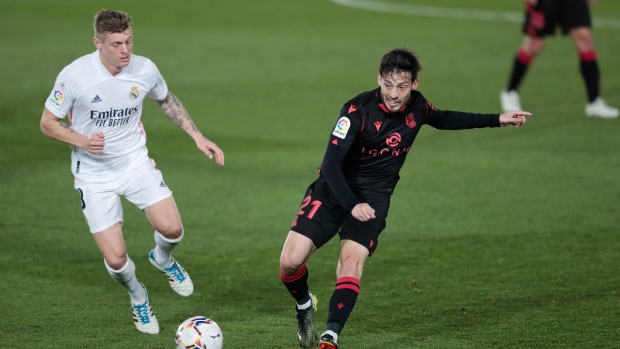 MADRID — It was a tactical change that didn't last more than 15 minutes, but it was just long enough to cost Real Madrid a chance to fight for the Spanish league lead in the derby against Atlético Madrid next weekend.

Coach Zinedine Zidane's attempt to push Madrid forward by switching formations midway through the game against Real Sociedad backfired on Monday, leading to a 1-1 home draw that kept the defending champions from getting within range of the city rival going into the derby at Atlético's Wanda Metropolitano Stadium on Sunday.

Madrid conceded after Zidane changed a 4-3-3 formation to 3-5-2 at halftime, leaving Madrid more exposed defensively. It needed an 89th-minute equalizer by Vinícius Júnior to salvage the draw.

“We changed to three defenders because I didn't like how we were pressing forward, but then we changed it back quickly,” Zidane said. “Maybe it hurt us. I was trying to change the dynamic of the game.”

The draw halted Madrid’s four-game winning streak in the league and left the club five points from its city rival, which has a game in hand. Madrid has the same points total as second-placed Barcelona but trails on goal difference.

A win would have moved Madrid within three points of Atlético entering the derby.

“We had our chances but couldn't capitalize on them and in the end we lost two points at home,” Zidane said. “We can't forget that we were up against a great rival and it played very well.”

Sociedad, which had won three in a row in the league, stayed in fifth place, six points from fourth-placed Sevilla in the final Champions League place.

“We leave with a bad taste in our mouth,” Sociedad forward Cristian Portu said. “We deserved more. Usually an away draw against Real Madrid is a good thing, but not with the way that the game developed.”

Portu opened the scoring for the visitors with a header into the top corner in the 55th minute, taking advantage of some soft defending by Madrid left back Ferland Mendy.

“There was some disconnection after the change to three defenders,” Madrid goalkeeper Thibaut Courtois said. “We were a bit lost and they had more space. In the end, Mendy couldn’t get to the cross in time and they scored a great goal.”

Zidane said he made the tactical change because he wasn’t happy with how the team had been playing.

Vinícius Júnior, in his 100th match with Madrid, equalized with a shot from inside the area.

Madrid forward Mariano Díaz came close by hitting the crossbar earlier in the game, and midfielder Casemiro also wasted a couple of good opportunities with second-half headers that flew wide.

It was Madrid’s first draw at home in the league, adding to three losses.