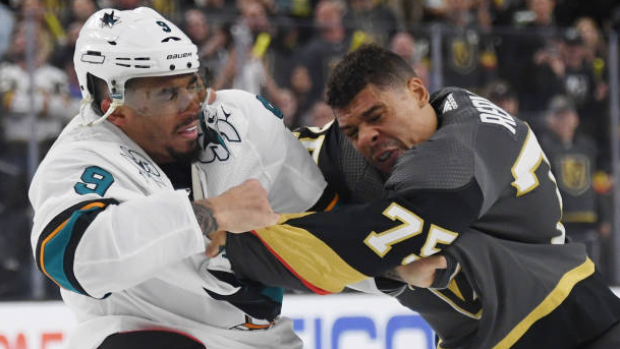 Vegas Golden Knights forward Ryan Reaves did not pull any punches when he was asked Tuesday for his reaction to San Jose Sharks winger Evander Kane's comments that he was "jumped from behind" by a linesman in the pre-season finale between the two teams.

"He’s weak. He gets taken down by a ref. It happens," Reaves told KTNV in Las Vegas. "Gotta get in the gym, no?”

Kane, who was knocked to the ice by Kiel Murchison as the linesman attempted to separate him from Golden Knights defenceman Deryk Engelland, officially received an automatic three-game suspension on Tuesday for pushing Murchison after the two got up.

Reaves did not appear to sympathize for Kane, who will miss back-to-back games against the Golden Knights to start the season.

“Poor Evander. So tragic," Reaves said with a smile. "I wish he was on the ice. It’s always more fun when he’s on the ice."

👀 This rivalry might be the best in the #NHL right now. https://t.co/hEMg4sZgoS

Kane argued Sunday that there is a difference in the way he is treated compared to other players on the ice when it comes to scrums, though Reaves said he didn't agree with that assessment.

"No, I don't understand why he would say that," Reaves said.

Kane was assessed 27 penalty minutes on Sunday against Vegas. Barring a reduction in his suspension, he will eligible to return on Oct. 8 against the Nashville Predators and will next face the Golden Knights on Nov. 21 in Las Vegas.