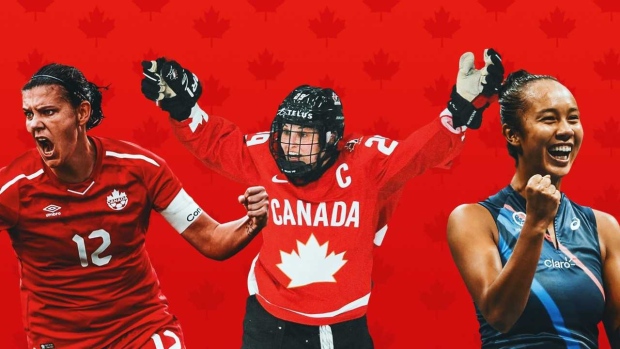 As summer draws to a close, we here at The Shift are looking back at what has been a phenomenal and entertaining summer of women’s sports in general, and specifically for our Canadian women.

Women have dominated the conversation of sports recently, from the world’s largest stage at the Olympics to the Women’s Worlds on home ice. There was no shortage of excellence across a variety of Canadian women’s sports.

Making history this summer at the Tokyo Olympic Games, capturing the gold medal in women’s soccer for the first time in the nation’s history. Led by legendary forward Christine Sinclair and anchored in net by Stephanie Labbé, Team Canada defeated Sweden 3-2 on penalty kicks.  Sinclair, Sophie Schmidt and Desiree Scott are now three-time Olympic medalists, while 11 other players became two-time medallists, increasing Team Canada’s winning pedigree on the world stage. One of those 11 players was midfield Quinn, who made history by becoming the first openly transgender and non-binary athlete in any sport to win a gold medal. Team Canada Women’s grand victory has inspired the nation as calls are increasing for the creation of a Canadian women’s professional soccer league.

On the ice, Canada won gold for the first time in nearly a decade this year. In a storybook matchup against historic rival Team USA on home ice in Calgary, the Canadian women were looking to capture gold for the first time since 2012 after a disappointing year that saw them not reach the final for the first time ever in the tournament in 2019. Canada went undefeated through the entire tournament to that point, but pressure was on as the U.S. had won it all the last five years in a row and eight of the previous nine world titles. Deadlocked at 2-2 going into overtime, captain and hockey legend Marie-Philip Poulin rose to the occasion, and buried a shot that was heard around the world to seal the deal for Team Canada at home.

BAR DOWN FOR THE GOLD MEDAL! CAPTAIN MARIE-PHILIP POULIN HAS DONE IT! 🇨🇦#WomensWorlds pic.twitter.com/xm7uRGGgCQ

Stepping aside from team sports to one of the most downright electric sporting events of the summer, two young women stole the spotlight. 19-year-old Canadian Leylah Fernandez of Montreal faced off against 18-year-old Emma Radacanu of Great Britain (who was born in Toronto!) under the bright lights of Arthur Ashe Stadium in New York.

Both young women had absolutely astonishing paths to the final. Fernandez entered the tournament ranked 73rd in the world, while defeating three-time grand slam winner Angelique Kerber, fifth-ranked Elina Svitolina, third-ranked Naomi Osaka and second-ranked Aryna Sabalenka to punch her ticket to the final. Meanwhile, Radacanu entered the tournament ranked 150th before absolutely bulldozing through the tournament. She became the first qualifier to win a major title without losing a single set, as she went on to best Fernandez in straight sets - 6-4, 6-3 - to cap off the tournament with a storybook ending. The two women dropped some of the most dominant performances in the sport’s history, capturing the attention and excitement of sports fans across the world.

Let’s first point out that the first 13 medals for Canada were all won by women! Not to mention all of the record breaking, history making moments that were made. Penny Oleksiak became Canada’s most decorated Olympian with a total of seven medals. In the debut of a sport, the women’s canoe sprint, Canada won two medals; Laurence Vincent Lapointe won silver in the first-ever event and in double 500m alongside Katie Vincent, winning bronze.

In a time where the COVID-19 pandemic has led to the unfortunate cancellation of numerous women’s sporting events, including the postponement of the Olympic Games, it’s inspiring and relieving to watch women dominate the conversation of sports after numerous obstacles have stood in the way. It brings hope that moving forward, as the world slowly but surely overcomes the effects of this pandemic, women’s sports will continue to blossom and continue to inspire the next generation of female fans and athletes everywhere.