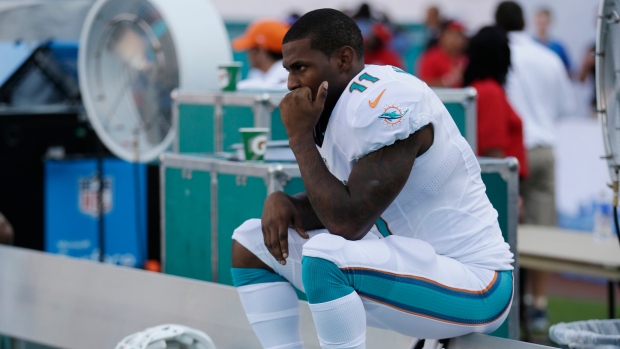 DAVIE, Fla. - Mike Wallace walked out of the Miami Dolphins locker room and into the off-season Monday carrying two footballs under one arm and a helmet in the other.

Wallace has three years left on a $60 million, five-year contract. But his future's suddenly in doubt after coach Joe Philbin benched his star receiver for the second half of Sunday's season-ending loss to the New York Jets.

Following the game, Wallace acknowledged having an argument with the coaching staff. He backtracked Monday, saying he wasn't upset about anything, and didn't refuse to play.

Teammate Brandon Gibson said Wallace was frustrated after being targeted only once in the first half. The frustration has been building since last year, Gibson said.

"He may have not had the best team thoughts at one point," Gibson said. "He just wants to contribute."

In the postgame locker room, Gibson spoke for Wallace, which created a weird scene as they stood side by side.

"Sometimes people aren't able to express themselves the right way," Gibson said Monday. "I didn't want him to get in front of the media and say something he was going to regret that made him sound like a selfish guy. That's not his character."

When Wallace was asked Monday if he was shocked, disappointed or angry about being benched, he said yes. But he said he still likes Philbin.

"It was coach's decision, so I went along with it," Wallace said. "He did what he felt was right, and I stand behind him."

"I had a conversation with him during the game and made a coaching decision," Philbin said.

So what's next? The Dolphins, who went 8-8 and missed the playoffs for the sixth consecutive year, would take a big salary-cap hit if they released Wallace. He's the cornerstone of a receiving group already expected to undergo a shakeup, with Gibson and Brian Hartline uncertain to return.

Wallace said he wants to be with the Dolphins in 2015, but it's unclear whether the team believes the relationship can — or should — be repaired.

When asked about the episode altering Wallace's status with the team, Philbin said: "Nothing has changed right now. ... I haven't thought about who's playing what position in 2015."

Quarterback Ryan Tannehill said he wants Wallace back, and said any rift can be repaired before the start of off-season workouts.

The speedy Wallace tied a career high with 10 touchdown receptions, but averaged only 12.9 yards per catch, well below his career average of 15.6. He and Tannehill have struggled for two years to click on long passes.

"He scored a lot of touchdowns, and we'll look to increase that," Tannehill said. "We want to hit more deep balls to him. That's his forte. We're going to take a long hard look at reasons we didn't, and correct those over this off-season."

Wallace was asked if he was underused this year.

And do Sunday's events affect his chances of remaining with the Dolphins?