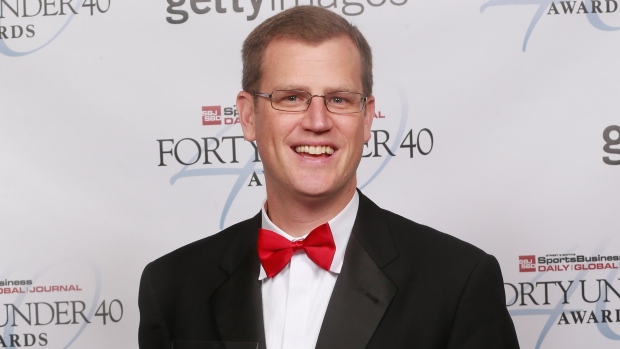 Maple Leaf Sports & Entertainment has looked once more to the U.S. for a sports executive to replace CEO Tim Leiweke, who leaves his position in two months.

Three sources familiar with the matter told TSN that MLSE’s board was recently interested in interviewing Sam Kennedy, a senior executive with Fenway Sports Group in Boston.

Fenway is the parent company of the Boston Red Sox and the English premiership soccer club Liverpool F.C.  The company also owns the home stadiums for both teams as well as a majority interest of the New England Sports Network, a regional sports network, and 50 per cent of the NASCAR team Roush Fenway Racing.

Kennedy, who is in his early 40s, grew up in the shadow of Fenway Park and is a rising star in the sports business industry. He helped to navigate the potential backlash when the Red Sox placed ads over Fenway’s famous left-field wall and, according to the Boston Globe, helped last year to introduce a dynamic ticket pricing model for the Red Sox.

It’s unclear who else MLSE has interviewed for the position.  MLSE has contacted at least one former candidate who competed for the job against Leiweke.

MLSE is jointly owned by Bell Media, TSN's parent company, and telecom rival Rogers Communications. The perception that those companies are often at odds – it’s been said that they are the Montagues and the Capulets of the sports industry - has made some sports executives contacted by MLSE wary.

Leiweke joined MLSE in 2013 after working for 13 years for the Anschutz Entertainment Group, which owns the Los Angeles Lakers and Kings. After a rough start, when he drew criticism for a plan to remove photos of Leafs legends from the hallways of the Air Canada Centre, Leiweke won praise for his hiring of Raptors GM Masai Ujiri, and for navigating local politics to get a new $30-million practice facility built for the Raptors.

John Cassaday, the recently retired chief executive of Corus Entertainment in Toronto, is widely considered a front-runner for the job. But even he has his detractors on the board. Cassaday is 60, according to Forbes.com, and some MLSE board members, a source told TSN, would prefer a younger CEO.

MLSE hired an executive search firm to help find Leiweke's successor in January, highlighting how difficult the search for a replacement to Leiweke has become.

Negotiations within the board over a possible purchase of the Toronto Argonauts has also highlighted how thorny relations are between Bell and Rogers.

A source familiar with the matter told TSN that MLSE secured a tentative agreement from the CFL to grant the Argos the right to host three Grey Cups over the next decade if the company completes a purchase of the team from David Braley. But Rogers has little interest in a move that would help to shore up the CFL in Toronto, so it has not wholeheartedly embraced the purchase, the source said.