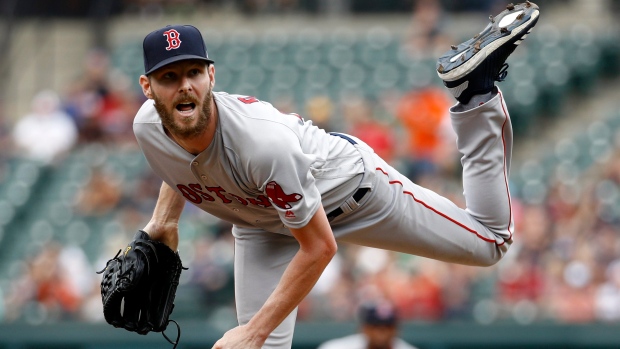 BOSTON — Chris Sale understands it's a perfect time for the Boston Red Sox to be cautious with his troublesome shoulder.

He's just frustrated that he's back on the disabled list.

Boston returned the ace lefty to the 10-day disabled list Saturday after just one healthy start. He was already on the DL earlier this month with what the team called mild shoulder inflammation.

Last Sunday, he was activated against the Baltimore Orioles and struck out 12 in five shutout innings, which extended his scoreless innings streak to 28. He is 12-4 with an AL-leading 1.97 ERA and 6-0 with a 0.20 ERA in his last seven starts.

"It's definitely less than it was last time," he said, standing in the middle of the clubhouse before Boston's scheduled game against Tampa Bay. "It didn't bounce back, wasn't really responding the way we wanted it to. Given kind of where we are, it was kind of right call to give it some rest and stay on top of it. You don't want to be playing catch up during a time like this."

With Boston holding a big lead in the AL East and the best record in the majors, Sale will get some rest for what the team hopes will be a long post-season run.

"Obviously terrible timing, not exactly the most ideal situation. To be honest, quite miserable for me. But, at the same time, I'm not going to sit around and pout," he said. "I'm going to keep my chin up. I'm on the best team that ever walked the planet. I've good teammates that have my back and I appreciate that."

Manager Alex Cora said the team wasn't about to take any chances.

"I think it's a smart move," he said. "This guy is very important to what we're trying to accomplish and if he needs to skip one, two, three (starts), whatever, we're willing to do that. He'll be back. Like he said, he feels better than the last time we put him on the DL, so he'll get his rest, he'll go through treatment and we'll go from there."

The 29-year-old Sale is a top contender for the AL Cy Young Award, but he understands the need to be patient this time. He said the treatments seem to be working.

"We've done some strength stuff, some stretching, obviously treatment and stuff like that. It's responding well to all of those, which is a good sign," he said. "I have strength in there, stability. Like I said, it's just time waiting for that inflammation to get out."

The move Saturday was retroactive to Wednesday. To fill his roster spot, the Red Sox recalled righty Brandon Workman from Triple-A Pawtucket. It's his third stint with the team this season. The reliever is 2-0 with a 2.59 ERA in 26 appearances.

Sale was first put on the DL on July 31.