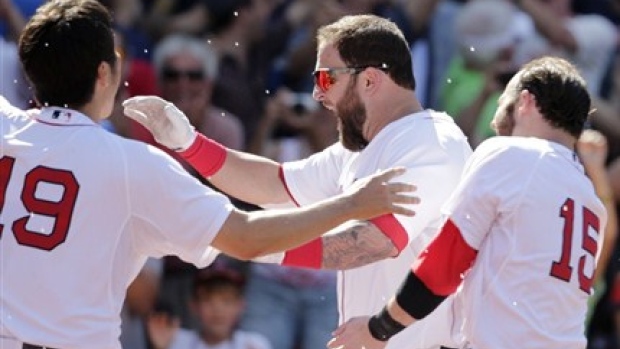 And just like that the Boston Red Sox had an unlikely walk-off win to cap an unlikely three-game sweep.

Ortiz and Napoli hit back-to-back home runs in the bottom of the 10th inning Wednesday to lift the Red Sox to a 2-1 win over the Minnesota Twins.

The blasts were just the second and third hits for the Red Sox all game.

They scored only five runs in their three-game sweep of the AL Central basement dwellers.

No one for either team touched third base until Chris Parmelee hit a solo homer for the Twins in the top of the 10th inning for a 1-0 lead.

Before that, right-handed starters John Lackey and Kyle Gibson had help shut down the offenses while they were on the mound.

Lackey went nine innings, striking out nine and allowing just three hits and a walk and trimming his ERA 0.28 points to 2.96 for the season.

Gibson retired the first 14 Red Sox batters he faced and gave up just one hit while striking out eight in seven innings. He ran his personal shutout streak to 22 innings.

Parmelee had three of Minnesota's four hits as the Twins finished up a nine- game road trip 3-6. Parmelee drove a 1-2 pitch from Koji Uehara (2-1) into the Red Sox bullpen behind right field with two outs.

"It's the worst feeling in the world," Fien sighed. "They asked me to come up big and I came up with a (loss)."

The Red Sox went 5-2 on a seven-game homestand and picked up their fifth sweep of the season. They are 10-2 in their last 12 at home without giving up more than three runs in any of the games -- their longest such streak since Aug. 3-16, 1915.

Gibson was perfect until Daniel Nava hit a two-out ground-rule double in the fifth inning. Brock Holt in the sixth inning and Ortiz in the seventh both reached on errors but neither made it to second base.

Lackey was no slouch. After giving up a two-out single to Parmelee in the second inning, he retired eight in a row before Parmelee singled again with one down in the fifth.

The right-hander then set down nine straight before Eduardo Escobar's one-out single in the eighth, but Escobar was thrown out trying to take second base.

The first Twins runner to reach second base safely was Parmelee in the fifth on a wild pitch. Lackey walked Dozier with two outs in the ninth but stranded him at first base.

Brian Duensing relieved Gibson to start the eighth inning and retired three Red Sox in a row on groundouts. He got the first two outs in the ninth and Jared Burton got the last.

The Red Sox start a 10-game road trip at Oakland on Thursday ... The Twins start a four-game homestand against the White Sox on Thursday ... Ortiz hit his 16th home run of the season and Napoli got his seventh ... Parmelee has four home runs.