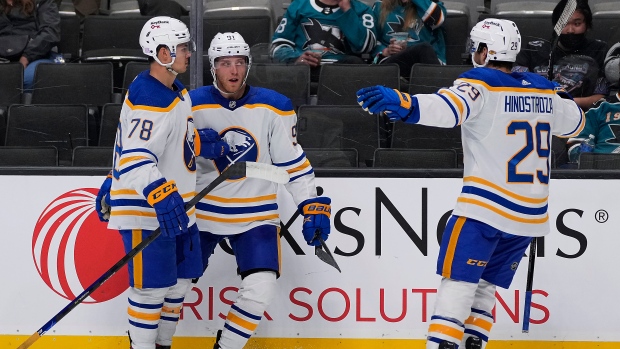 Last week, Jeff Blashill tried to go to the same restaurant where he had dinner in March 2020, before the NHL season shut down. He found the windows to be boarded up.

The reminder of how many things have changed over the past 19 months was followed the next day by his Detroit Red Wings coming back to win a game they likely would have lost at any other time over the past two years. It showed their longtime coach how far the team has come.

“We’ve been in situations where we’ve found our way to wins and I think that breeds confidence,” Blashill said. “I think we have some guys that have matured over the years in terms of living through some of that. As hard as some of those moments are to live, you hope you grow, and a number of our guys have grown even through some of the difficulties we faced.”

Rebuilding is a difficult time in any professional sports league, and the opening weeks of the NHL season show just how different things can be. The Red Wings added talent and no longer look like the league’s doormat. The Buffalo Sabres are showing what good coaching can do for a young team, while the Ottawa Senators are a stride behind Detroit in hanging with better opponents.

The Arizona Coyotes are at the sort of “rock bottom” Blashill felt a couple of years ago. Arizona is the league’s only winless team at 0-9-1 after an offseason teardown designed to stockpile draft picks and prospects for a future that feels far off.

“We’re in the NHL and nobody will feel sorry for us,” first-year Coyotes coach Andre Tourigny said. “The most important thing for us is to keep getting better. The teaching part and getting everybody on the same page in our structure, in our system and in our detail is what’s important. That’s what will get us closer to the result we want. We cannot be 100% focusing on the result because if you forget the process that brings you the result, the result will never happen.”

Detroit is a good blueprint. A few years removed from a roster purge, the Red Wings are showing the fruits of picking high in the draft with rookies like Lucas Raymond and Moritz Seider contributing to morale-building victories.

“You can see it with some of these young guys that they’re gaining a feel for the league,” veteran Red Wings forward Adam Erne said. “We’re confident in each other. We’ve had some young guys coming in, we still do, but every game and every season that goes by is huge for experience and confidence.”

Confidence started growing for the Sabres with wins in five of their first seven games. Blowing leads in recent games has only served as a tough lesson for coach Don Granato’s team.

“You always want to play efficient,” Granato told the Buffalo News while on the road in San Jose, California. “You want to minimize how much energy you do expend, but we have a lot of young guys that have to learn that and get a feel for that.”

One of Buffalo’s older players, 33-year-old Kyle Okposo, said: “We’re going to go through ups and downs in this season, but if you’re riding the emotional rollercoaster, it’s going to be a long year.”

The Senators can score — and give up — goals in bunches, and the “Pesky Sens” moniker is fitting for a team that works hard but doesn’t yet have the talent to finish like the Red Wings. Ottawa players seem to have the right approach to losing tight games they one day hope to be on the other end of.

“The way that our team’s played, we believe that we’re playing better than our record shows,” forward Connor Brown said last week in Dallas. “And it’s important not to play down to the record and keep that swagger alive and keep doing the things that are making us play well.”

The New York Rangers bought out star goaltender Henrik Lundqvist in the fall of 2020 in large part because Igor Shesterkin looked like their goaltender of the present and future. Shesterkin is showing that early this season.

The 25-year-old Russian started 5-1-1 with a 1.70 goals-against average and .947 save percentage — among the best goalies in the league. He doesn’t have the size of back-to-back Stanley Cup champion Andrei Vasilevskiy, but the Rangers can see the makings of a contender built around Shesterkin.

During a post-whistle scrum against Colorado last week, St. Louis goaltender Jordan Binnington swung his stick in the direction of Avalanche center Nazem Kadri, the player who ended Blues defenseman Justin Faulk’s playoffs last year with an illegal check to the head. Binnington did not make contact, but got a 10-minute misconduct for his behavior.

“I don’t want to condone the stick-swinging — I definitely don’t want kids out there swinging their sticks,” said Binnington, who acknowledged he might have taken things too far in the heat of the moment. “I’m not crazy. It’s an intense game, and it’s not part of the modern day hockey. Maybe back in the olden days. But it is what it is.”