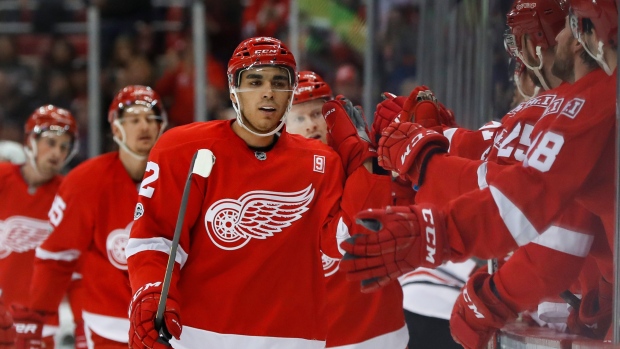 The Detroit Red Wings are standing firm on their offer to restricted free agent Andreas Athanasiou.

According to TSN Hockey Insider Bob McKenzie, the Red Wings have offered the 23-year-old a two-year, $3.8 million contract - a $1.9 million average annual value.

DET's standing offer on a two-year deal for AA has had an AAV of $1.9M.

McKenzie reports Red Wings general manager Ken Holland met with Athanasiou and his agent, Darren Ferris, in Toronto on Saturday and the two sides made some progress towards a deal.

Ferris said earlier this summer his client must consider the KHL as an option if the Red Wings didn't increase their offer. McKenzie noted heading to Russia was a legitimate possibility earlier this month if the situation remained in a holding pattern.

The Red Wings are currently $3 million over the cap and will have only $900,000 in space once Johan Franzen is placed on long-term injured reserve. Holland has already said he expects the team to have to make a move to be cap compliant by the season.