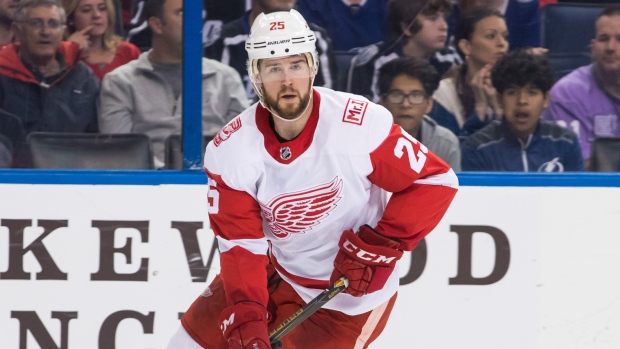 Defenceman Mike Green is staying put in Detroit, according to TSN Hockey Insider Darren Dreger, who added the Red Wings are likely to add Jonathan Bernier Sunday and potentially Thomas Vanek as well.

It’s believed Thomas Vanek is considering a return to Detroit. Mike Green is staying put and the Wings likely to add Bernier Sunday as well.

Green has spent the past three years with the Red Wings. The 32-year-old had eight goals and 25 assists in 66 games for the Red Wings last year. For his career, the 2004 first-rounder has 142 goals and 322 assists in 787 games.

Bernier played for the Colorado Avalanche last season, finishing with a 19-13-3 record in 37 games. The 29-year-old also had a 2.85 goals against average and .913 save percentage.

Vanek played for the Red Wings in 2016-17 before he was moved to the Florida Panthers at the trade deadline that season. The 34-year-old split last season between the Vancouver Canucks and Columbus Blue Jackets, finishing with 24 goals and 32 assists in 80 games. For his career, Vanek has 357 goals and 396 assists in 965 games.