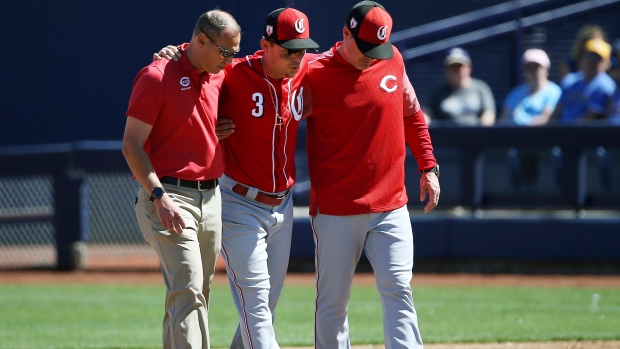 GOODYEAR, Ariz. — All-Star second baseman Scooter Gennett will miss the opening months of the season with a severe groin strain, costing the Cincinnati Reds their most productive hitter less than a week before opening day.

Gennett injured the right side of his groin Friday while making a play on a ground ball hit by Milwaukee's Yasmani Grandal. He had an MRI, and the Reds said Saturday that he's expected to miss two to three months.

"He is in a lot of pain," said manager David Bell, who was with Gennett when the medical staff read his MRI. "He wants to play so bad. That makes it tough, but he's already thinking positive."

The injury forces the Reds to rearrange their infield — which had been one set area of the team — heading into the season opener Thursday against Pittsburgh at Great American Ball Park. Bell plans to move shortstop Jose Peraza to second base and use newcomer Jose Iglesias at shortstop.

Peraza has played second, a major factor in Bell's decision. The Reds signed Iglesias to a minor league deal on Feb. 23, giving them depth at shortstop.

"Peraza will continue to play some shortstop," Bell said. "We still see him as a shortstop. There were concerns about moving him back to second because he worked so hard at shortstop, but the willingness of him to move made it an easy conversation."

The Reds overhauled their outfield and their starting rotation through a series of off-season trades, but the infield had been set with Joey Votto at first, Gennett at second, Peraza at shortstop and Eugenio Suarez at third.

Gennett's injury is a significant setback to the offence.

The Reds claimed Gennett off waivers from the Brewers a day before they broke camp for the 2017 season. Gennett adjusted his swing and had a career year. He became the first major leaguer to have four homers, five hits and 10 RBIs in a game. He also led the majors with four grand slams, joining Lou Gehrig as the only players with a four-homer game and a four-grand slam season.

Last season, he became an All-Star for the first time. His ninth-inning, pinch-hit homer sent the All-Star game to extra innings. Gennett finished second to Milwaukee's Christian Yelich for the batting crown with a .310 average.

In the last two years, Gennett has 50 homers and 189 RBIs, joining Dave Parker and Deron Johnson as the only Reds to put up such numbers in their first two seasons with Cincinnati. He is only the second baseman in Reds' history with eight homers and 24 RBIs in a month — and he has done it twice.

After making $5.7 million last season, he avoided arbitration and settled for a one-year deal for $9,775,000. Gennett, who turns 29 in May, is a free agent after this season. He'd like to stay in Cincinnati, but the Reds haven't been interested in discussing a long-term deal.