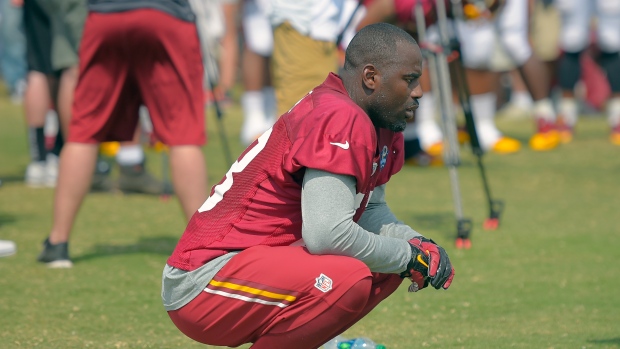 Coach Jay Gruden said he was worried about the situation.

The Redskins were having Galette's ankle checked when Gruden met with reporters after practice, and the coach wasn't happy with the situation.

"It was just at the end of practice," Gruden said. "He was running around a corner and went down. He's not the type of guy that would lay down if there was nothing, so I'm very concerned."

Gruden said there was a "big chance" that Galette would not play in Saturday's preseason game against the Ravens. Galette had talked on Tuesday about how excited he was that the Baltimore game would be his first time on the field this preseason.

The Redskins signed Galette after he was released by the Saints, but a left pectoral injury had kept the linebacker off the field so far this preseason.

The latest injury just continues what's already been an injury-filled preseason for the Redskins. Four Washington players already have suffered season-ending injuries this summer, and the Redskins are hoping Galette doesn't add to that total.

Galette's teammates were disappointed for the linebacker. And although most of them did not see what happened, they are hoping for good news.

"Hopefully, the (tests) come back negative," defensive end Kedric Golston. "But Junior has (done) everything that we've asked him to, (that) the organization has asked him to do. He's been a great addition. You just hope that things work out for him, and we can get him back."

"He went down, and we'll see what happens," Cousins said. "Our thoughts and prayers (will) just be with Junior getting healthy and praying it's not anything too serious."

Gruden said linebacker Ryan Kerrigan (arthroscopic knee surgery) has been practicing well and probably could have played last week — and this week. But Gruden and the training staff will make the decision about Kerrigan playing against Baltimore later in the week. He also has yet to play this preseason.