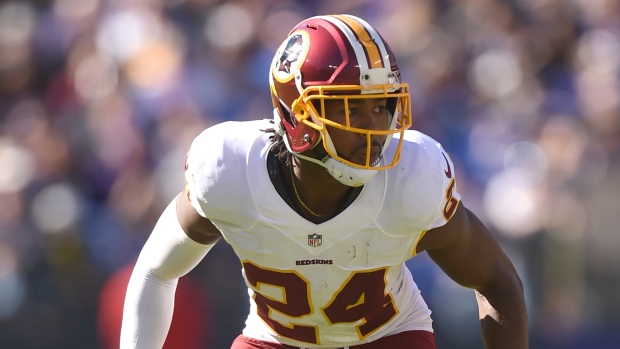 ASHBURN, Va. — Washington Redskins cornerback Josh Norman and tight end Jordan Reed were cleared to fly with the team to London for its game against the Cincinnati Bengals after dealing with concussions.

Redskins coach Jay Gruden said Thursday it still had not been determined whether either Norman or Reed — two of Washington's most vital players — would be able to play on Sunday.

The team was to make the trip later Thursday and practice in London for the first time on Friday.

Norman was hurt when he hit his helmet on the turf during Washington's 20-17 loss at Detroit on Sunday. He said he thinks he briefly lost consciousness.

But after feeling well on Monday and Tuesday, Norman said, on Wednesday he "had a little setback, but that's normal, they say." On Thursday, he said, he felt "absolutely great."

The Redskins are hoping he can play so he can cover Bengals star wideout A.J. Green, a player Norman called "a phenomenal receiver, best of the best."

Reed has missed the past two games after getting a concussion against Baltimore on Oct. 9.

Gruden said the Redskins (4-3) would need to monitor those two players after arriving in Britain to make sure they are OK to play against the Bengals (3-4).

Both Norman and Reed practiced Thursday.

"I'm not going to guess on those two guys" and their availability on Sunday, Gruden said. "I try to say it a lot, but there is no way of knowing. Tomorrow could be totally different. They could feel totally different than they do today. We just don't know, but signs are looking better."

Also practicing Thursday was left tackle Trent Williams, who hurt his left knee against Detroit but said he would be ready to go Sunday.

Running back Matt Jones, though, missed a second consecutive day of practice because of what Gruden said was an injured knee. Gruden has said rookie Robert Kelley would start if Jones — who fumbled into the end zone against Detroit — does not.