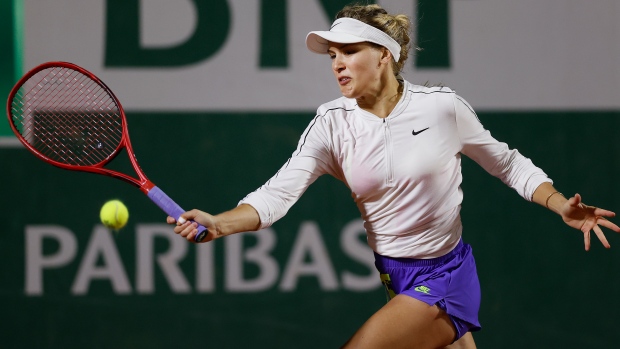 Genie Bouchard tore the subscapularis in her right shoulder during a March match in Guadalajara. She tried to rehab the injury through conservative methods during the next few months, but it didn't work.

And, so, there was only one option left.

"I'm so disappointed I ended up having to have surgery," said Bouchard, who is No. 114 in the WTA rankings. "I made it to 27-years-old without having to and I was very proud of my record ... I was just very scared beforehand. I was scared to go under general anesthesia. I had never been before and I was talking to anesthesiologists and was, like, 'Don't give me too much, but don't give me too little.' It's just one of those fears I have. But, besides that, I think the hardest part will just be this next phase, which is progressing into getting back to normal with the shoulder and then training. It has to go so progressively where I have to be patient and that's not my strong suit."

Bouchard is already out of her sling and feeling better. She's determined to get back on court in a couple months and be playing again by the end of the season. In the meantime, the 2014 Wimbledon finalist is finding other ways to stay busy.

"Everyone told me, 'After you have surgery make sure you have things to do and shows to watch, because you're going to be so bored.' It’s been five and a half weeks and I have not had one second to slow down. I have not been bored. I've been able to do things I don't normally have time to do."

Bouchard is actually considering trading her racquet for a microphone.

"I don't know if I can even say anything yet, but I've always had an interest in media and if I have a little bit of time right now then why not," she said with a smile. "I might become a reporter. I might steal your job. Beware!"

With that in mind, TSN asked Bouchard to provide some analysis of this year's Wimbledon, including her thoughts on Denis Shapovalov, Felix Auger-Aliassime, Bianca Andreescu, Roger Federer and Novak Djokovic. Bouchard also offered insight on Saturday's championship match between Ashleigh Barty and Karolina Pliskova.

I know Wimbledon holds a special place in your heart, what's it been like watching from afar?

Why did I just get this email 😭😭💔💔🥺🥺 missing ⁦@Wimbledon⁩ so much!! pic.twitter.com/qpwKhTtrU3

Shapovalov is into his first major semifinal at age 22. What do you remember about your first experience at that stage as a 19-year-old at the 2014 Australian Open?

"I remember it being a very big moment. I don't think I was too nervous, because in Australia I was such an underdog in every match. I assume he'll feel that way as well, which can give you strength and can let you be a little fearless and go for it and have that surprise performance."

Shapovalov will play Djokovic, who is the World No. 1. You've faced legendary players in the past, including Serena Williams on three occasions. What's that like?

"The first time I played Serena was in Cincinnati in 2013 and I was a qualifier and I was about to go on court in the second round and I called my mom and I said, 'Mom, I'm terrified that I'm going to lose 6-0, 6-0.' That was 10 minutes before the match. I was in the middle of my warm-up and I just called her. Then I go out and win the first set 6-4. I lose the match, but it just shows you that anything can happen. Once you reach a certain level everyone is good so it's so mental."

How do you get into that proper mindset?

"Stepping on the court with someone like Serena or Venus that I watched as a kid, you have this surreal moment for sure, and it’s almost like seeing a celebrity in person. They look the same, but maybe slightly different from TV. You know, there's different things you notice in person. You're like, 'Oh, OK, she's a bit taller than I thought.' So, I've had that experience seeing them from across the net and being like, 'This is so crazy.' But you really have to put that aside because you're there for a reason too, you deserve that spot and it's hard maybe at the beginning when you're younger, but that intimidation factor you get from them is really important to put aside and just be like, ‘They're not superheroes. They can lose so why not today?'"

The experience at Wimbledon is different than other majors. Centre Court has a different feel. What do you remember about your 2014 semifinal against Simona Halep?

"That was a great day. I always look back on that as one of my favourite matches because it enabled me to get to the finals, which is my best result. We were the second semifinal so I had time to watch the girls before me on TV and that helped settle the nerves a little bit. I remember being so focused. The crowd is full, but not as crazy. They're very respectful and clapping and very classy. It's a different kind of crowd. It's quieter sometimes and that's a void that can be filled with bad thoughts so it's extra important to focus."

With the fans at Wimbledon, it's almost like you have to earn it with them.

"They want to see really good tennis. They won't support you for no reason."

You are a fan favourite at the All England Club. Shapovalov, who is also a former junior champion there, seems to be gaining support. How much is the crowd a factor?

"It's not as big of a factor as at other tournaments, but it feels incredibly special when you do get that support."

What's your perspective on this incredible season Djokovic is putting together?

"It's actually insane. I remember when he had that amazing season in 2011 and he didn't lose a match through the first months of the year and we're thinking it's one of those once-in-a-career seasons and we are 10 years later and he's having an even better season. It's insane. It's completely insane. When all these guys are gone, we're going to have a void that needs filling, because we are too blessed with all these amazing legends."

Speaking of which, I know you're a Federer fan. We're not used to seeing him lose at Wimbledon the way he did on Wednesday. How did you process that result?

"Well, first of all, I was just so happy to see him playing and see him back. And, if I'm going to be honest, I'm impressed he even made the quarterfinals, because I didn't know what his level would be like. He's getting older. So, I think the tournament was a great success for him. And, kudos to his opponent [Hubert Hurkacz], he's a good player and totally deserved that. Obviously, the fan girl in me is sad that he lost, but Federer making the quarterfinals at Wimbledon in 2021, that was not on my Bingo sheet so that was a win for him."

Auger-Aliassime had a breakthrough result at Wimbledon reaching his first career major quarterfinal. What stands out about your fellow Montrealer?

"I love him. He's the nicest, sweetest boy. I remember training in Montreal at the National Centre and seeing him in the younger groups and he was probably 12 … and just thinking he worked so hard. He just put his head down and looked so humble and hardworking. I remember, with some of the players, we were looking and saying, 'This kid is going to be good.'"

You've played Barty and Pliskova multiple times, who do you see as the favourite in Saturday's championship match?

"I definitely have to go with Ash Barty. She has been playing unbelievable tennis for a while now. I played her at Wimbledon in 2018 and she is so tough. She's not the tallest player [5-foot-5], but her serve is unbelievable. It's deceptively good. It's really fast and I just remember struggling with that a lot. So, with that and the mix in her game and slice and everything she can do on the court, she has it all and she can disrupt Pliskova."

How hard is it to deal with the variety in Barty's game?

"It’s tough, because she'll come at you with a really tough serve, a really fast-paced serve, and then a slow deep slice. So, it's completely different balls you're seeing all the time and that's part of what makes her so great, especially against big hitters, who like more of a rhythm."

Andreescu lost in the first round at Wimbledon and has been facing some challenging times since that incredible 2019 season. And she just split with long-time coach Sylvain Bruneau. What's it like dealing with a coaching change as a young player?

"Sounds exactly like my story back in the day (smile). It's tough. I love Sylvain. I love Bianca. I love both of them. I think Sylvain will always be in her corner just like he's always been in my corner all these years. He's such a great dude and he will always support all his athletes. We've all known him from a young age as well so we have that extra relationship.

"It’s okay for her to be going through this. I know she had a couple injuries, she had a couple COVID issues. It's like what I felt in 2015 with this pressure to win a slam. I made [Wimbledon] finals the previous year so I got to win. Well, she won one so now, what, she has to win two to satisfy you guys? And the next year she has to win three? It's an amazing thing to accomplish, but that doesn't mean you're going to accomplish it every year. So, you know, if she retires tomorrow she's had an unbelievable career. So, people just need to realize how hard it is to do this and to do it once is unbelievable. She'll be fine. She's great. She'll be back."

Use your setbacks as springboards.
Change hurdles into opportunities.
See barriers as blessings.
Let your fears become courage.

As a Montreal native, what was it like to see the Canadiens make the Stanley Cup Final for the first time since 1993?

"It was surreal. They hadn't gotten this far since '93, which was the year before I was born so I never witnessed anything like this in my life. Obviously, being born and raised in Montreal, the Habs are life there. I was just so happy for the team and the city as well. I feel like Canada, in general, and Montreal and Quebec have been through a lot with the pandemic. They had a lot of tough curfews and regulations so for them to be slowly getting out of that as this was happening was something that they very much deserved."