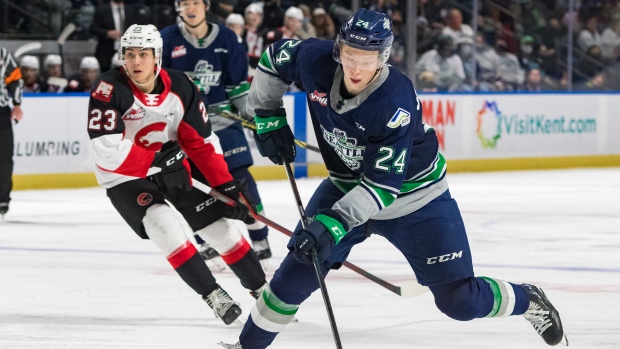 Reid Schaefer had to wait a long time to hear his name called at the 2018 Western Hockey League bantam draft.

"To be honest, I didn't even know if I was going to be drafted," said the native of Spruce Grove, Alta. "I was trying not to worry."

Schaefer watched as 12 of his teammates from Okanagan Hockey Academy Edmonton Prep got selected.

"We had a pretty stacked team that year," Schaefer said. "We had guys going in the first round, second round, third round and all that, so I was waiting around and congratulating all my teammates."

Finally, in the eighth round, the Seattle Thunderbirds used the 164th overall pick to take Schaefer.

Schaefer has certainly proven projections wrong during his NHL draft season. He opened the year with a 'C' rating from NHL Central Scouting, which is assigned to those considered candidates to be picked in the fourth round or later. He was No. 85 on the mid-season list of North American skaters, but after scoring 32 goals in 66 games he rocketed up to No. 31 in the final rankings.

TSN director of scouting Craig Button has Schaefer at No. 20 on his final list of all prospects.

"I'm a late bloomer," Schaefer readily admits. "Not a lot of people have believed in me. I think people are starting to finally notice me."

During a conversation with TSN, Schaefer outlined how he took his game to another level this season while helping the Thunderbirds reach the WHL final. The following is an edited transcript of the interview.

TSN: What led to your success this season?

Schaefer: "It's a testament to how hard I worked. Last season, I only had two points in 18 games. I really used the last off-season to better myself and hone my skills every day. I went into this season with a lot of confidence."

TSN: What did you work on last summer?

TSN: How did you get that confidence?

Schaefer: "[Head coach] Matt O'Dette believed in me, and he gave me an opportunity. He was a guy who trusted me and with his trust came my confidence. He's a guy I could rely on, and he pushed me to be better. He was a key factor in me gaining confidence."

Tremendous play by Reid Schaefer here to set up Matthew Rempe, putting the T-Birds up 2-1 in an elimination game.

Schaefer will be an interesting name to watch at the draft in July. pic.twitter.com/gnrGxZer1P

TSN: Nineteen of your 32 goals this season came after the calendar flipped to 2022. How did you elevate down the stretch?

TSN: How do you feel about your playoff performance?

Schaefer: "We had tremendous postseason success and that helped with my individual success. I like to rise to the occasion. We were down 3-1 to Portland [in the second-round series] and it was a matter of people stepping up … I definitely stepped up in the big games. Everyone on our team stepped up and we just believed."

TSN: How do you raise your game without getting carried away in big moments?

Schaefer: "There's definitely a lot of nerves, so you have to handle that. But, other than that, you just feed off the crowd. I like facing adversity and when you're playing in front of a big crowd it's nice to get in the game early and quiet them when you're in the away barn."

Reid Schaefer tickles the twine for the second time in the series and ties the game up for the @SeattleTbirds. #NHLDraft | #WHLPlayoffs | #SEAvsKEL pic.twitter.com/iIjbTvjIRr

TSN: How would you describe your game?

Schaefer: "I'm a big, two-way power forward with offensive upside. I'm a pretty good skater for how big I am. I think I possess a pretty good shot as well."

TSN: Who is your NHL role model?

Schaefer: "I like to model my game after a guy like Alex Tuch. Also, a guy I like is Josh Anderson. They are both two-way power forwards, who play with grit but also have offensive upside and have sneaky hands in tight and have that scoring touch."

TSN: What's your focus this summer?

Schaefer: "I'm trying to work on my first three strides and that explosiveness factor. I want to get to that max speed a lot quicker. Also, being a bigger guy, I want to work on my lateral agility. I know defenders at the next level are really good, so to be able to shake them and use my size to my advantage would be huge."

TSN: You aren't the only Thunderbird who will be drafted this year. What do you appreciate about the game of defenceman Kevin Korchinski?

Schaefer: "He's a stud. He's an unbelievable player with the playmaking abilities and how smooth he is with his skating and how slick he is with his hands. He's a heck of a player and will get his name called early."

TSN: What was it like playing against him in the Canadian Hockey League Top Prospects Game?

Schaefer: "That was a really cool experience and Kevin actually tripped me up in the third period there. I thought that was pretty funny. You don't really ever draw a penalty on a teammate."

TSN: You chirp him about that?

Schaefer: "Yeah. He thought I toe picked, but I thought he was all over me and just bear hugging me."

TSN: You missed the NHL Scouting Combine because of the long playoff run. So, what has the interview process been like for you since the season wrapped up?

Schaefer: "I got home four days ago, and I've been mauled by interviews. I had 12 this week and I have a few more next week. It's been a crazy week with having to adjust my schedule and change workout and skating times."

Schaefer: "There were six other guys on the Zoom call, and they asked me who I would like to fly a plane: myself or the six other guys. I said, 'Let's do it as a group effort and everyone can contribute. Let's all add our ideas together and hopefully keep this plane in the air!'"