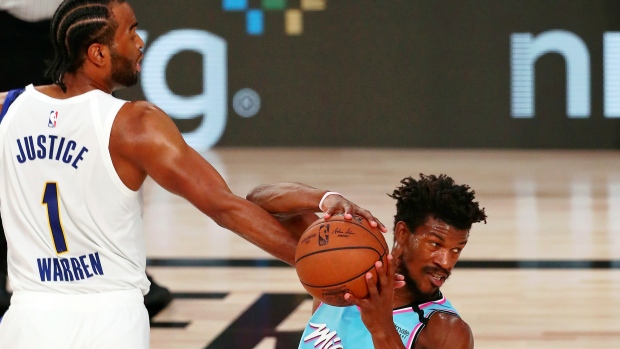 Wednesday’s results filled in five of what were the six unknown matchups for Round 1 of the post-season, which starts next week at Walt Disney World.

In the Western Conference: Houston and Oklahoma City will meet in the first round, meaning Rockets guard Russell Westbrook and Thunder guard Chris Paul get the chance to face their former teams.

“It’ll be interesting,” Paul said. “Two teams that know a lot about each other. We’ll prepare, get ready and we’ll see what’s what.”

Other West matchups that got clinched on Wednesday include the second-seeded Los Angeles Clippers against No. 7 Dallas, and No. 3 Denver against No. 6 Utah.

In the East, Miami and Indiana will meet in the first round — after the clubs close the regular season on Friday against one another to decide which team will be seeded No. 4 and which will be No. 5.

Indiana’s win over Houston on Wednesday set what had been the last two unknown series on the East bracket. No. 3 Boston will play No. 6 Philadelphia in a meeting between longtime rivals, and the Pacers are now locked into an East opening series against the Heat — with the potential of those teams playing nine times in a span of 10 games.

Miami beat Indiana on Monday. The teams meet again Friday then face off in Game 1 to begin a best-of-seven series early next week.

“It’s good to know that we play them,” Heat coach Erik Spoelstra said. “Just need to figure out what uniform we’re wearing.”

That will be decided Friday, when home-uniform advantage gets decided.

The other East matchups were known previously: No. 1 Milwaukee plays No. 8 Orlando, and No. 2 Toronto plays No. 7 Brooklyn.

In the West, Houston and Oklahoma City will be in the 4-5 matchup and Utah will be the No. 6 seed. The Jazz were locked into that slot by the Thunder defeating Miami, and Denver became the No. 3 seed when they lost to the Clippers.

The full list of matchups won’t be known until at least Saturday, when the West play-in series begins with Portland, Memphis, Phoenix and San Antonio bidding for those two spots. The winner of that series will take on the top-seeded Los Angeles Lakers in the first round, the only matchup that's yet to be determined.