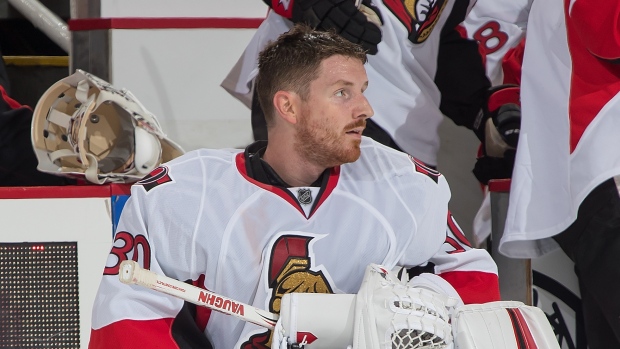 Andrew Hammond's stay with the Colorado Avalanche could be a short one.

According to James Gordon of The Athletic, Hammond will remain with the AHL's Belleville Senators on loan from the Avalanche while general manager Joe Sakic looks to trade the newly acquired netminder.

The Avalanche received Hammond, along with prospects Shane Bowers, Samuel Girard, Vladislav Kamenev and three draft picks in return for sending Matt Duchene to the Ottawa Senators on Sunday night. The Senators also traded centre Kyle Turris to the Nashville Predators as part of the three-team deal.

Hammond owns a $1.35 million cap hit in the final season a three-year deal signed with the Senators in 2015. He currently counts for $325,000 against the Avalanche cap while he plays in the AHL.

The 29-year-old appeared in just six games with the Senators last season, posting an 0-2 record with a 4.08 goals-against average and an .837 save percentage.

The Avalanche will continue to move forward with goaltenders Semyon Varlamov and Jonathan Bernier on their NHL roster and Spencer Martin, Ville Husso and Joe Cannata at the AHL level on the San Antonio Rampage.