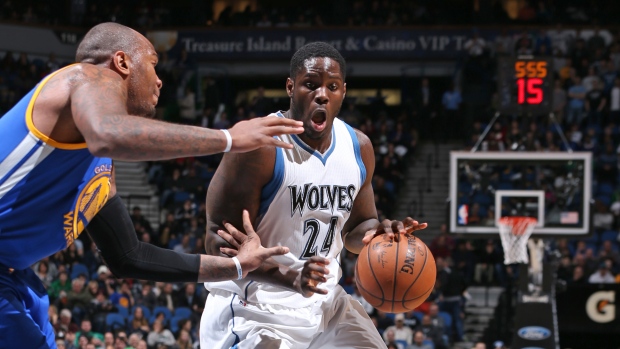 Anthony Bennett will become a free agent and is close to signing with his hometown Toronto Raptors, according to ESPN Basketball Insider Jeff Goodman.

Earlier, Yahoo Sports' Adrian Wojnarowski reported the Philadelphia 76ers, Portland Trail Blazers, Utah Jazz and Cleveland Cavaliers had reportedly passed on the former first overall pick on waivers and that the Raptors were interested in the forward but not for the waiver price of $5.8 million.

There's interest w/ teams in signing Bennett -- including his hometown Raptors -- but teams want him for less than that $5.8M waiver price.

A person with knowledge told the Associated Press on Wednesday that should the Canadian forward clear waivers he would be bought out by the Minnesota Timberwolves for $3.65 million.

Bennett who most recently played for Canada in a bronze-medal finish at the FIBA Americas championship, has not lived up to expectations since being drafted first overall by the Cleveland Cavaliers in 2013. He was acquired by the Timberwolves, along with fellow first pick and Canadian Andrew Wiggins, before the start of last season in a three-team deal that saw F Kevin Love go to the Cavs.

The 22-year-old forward has started just three games in 109 appearances and averages 4.7 points and 3.2 rebounds in 14.3 minutes per game through his first two NBA seasons.