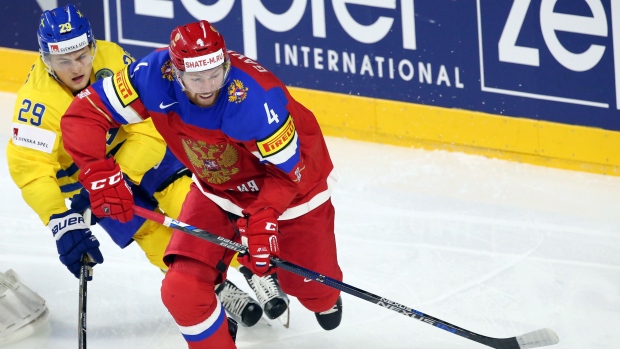 The Columbus Blue Jackets remain in pursuit of KHL defenceman Vladislav Gavrikov as they attempt to lure their 2015 draft pick to the NHL.

Gavrikov was reported by Russian news outlets to have re-signed in the KHL, but his agent, Dan Milstein told Aaron Portzline on Tuesday that Gavrikov remains a free agent.

Portzline reports two KHL teams are also in the mix, along with the Blue Jackets, to sign the defenceman.

Two Russian teams, #CBJ in hunt for Gavrikov. No contract signed as of 3 pm eastern today, Milstein says, and won't be until after Worlds.

Milstein reiterated Gavrikov's plan is to sign with a team at the world hockey championship, where he is currently playing for Team Russia.

He owns one assist and is plus-2 through three games at the worlds.

The left-hand shoot, who stands 6-foot-3, was selected in the sixth round (159th overall) in the 2015 Draft. He was ranked by TSN Director of Scouting Craig Button as the 37th best prospect in the class.