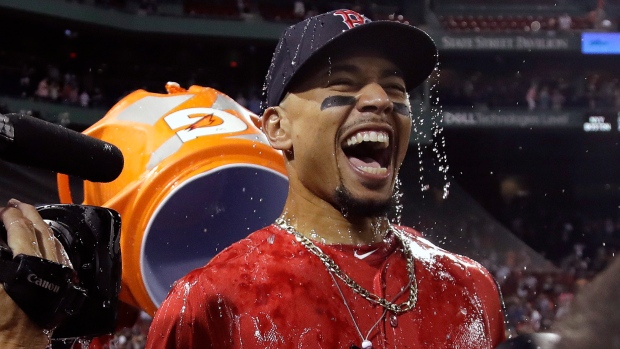 BOSTON — Outfielder Mookie Betts agreed Friday to a $27 million contract with the Boston Red Sox, the largest one-year salary for an arbitration-eligible player.

A four-time All-Star and four-time Gold Glove winner, Betts is eligible for free agency after this season.

Bradley is known for his spectacular plays in the outfield, but his bat has been a liability at times. He is streaky, hitting .315 with five homers and 14 RBIs in June but just .225 for the season as a whole, with 21 homers and 62 RBIs. He led the league in putouts and assists as a centre fielder.

Last year was a setback for the 25-year-old Benintendi in virtually every offensive category, raising concerns that he has hit his ceiling. Benintendi batted .266 in 2019 with 13 homers, 68 RBIs and 10 stolen bases.

After years of waiting for Rodríguez to develop into a stalwart of the rotation, he finally emerged as a front-line, if unspectacular, starter. He made every start, topped 200 innings for the first time and had a chance at 20 wins going into the regular season finale. In all, that added up to a 19-6 record, with a 3.81 ERA in 203 1/3 innings, all the best in his career.

Thrust into the de facto closer role by the departure of Craig Kimbrel, Workman emerged as a dependable late-inning reliever. At the age of 30, he posted a 10-1 record with 16 saves and a 1.88 ERA, striking out 104 batters — all the best in his career.

Barnes, 29, has also emerged as a reliable arm in the bullpen, good for 60-plus appearances a year and a lot of strikeouts. Although the right-hander's strikeouts have increased each year, he walked a career-high 38 batters in 64 innings in 2019, a small step back.

Hembree, a 30-year-old right-hander missed time in the middle of the season but had a 3.86 ERA in 45 appearances.