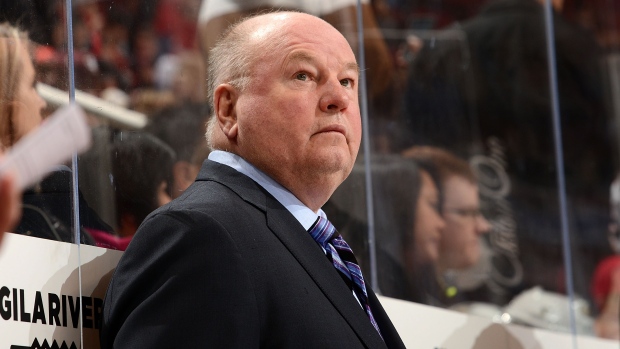 Bruce Boudreau has arrived in Ottawa and is reportedly set to meet with Senators GM Pierre Dorion for an interview on Friday about the club's vacant head coaching job.

The 61-year-old was fired by the Ducks last Friday after Anaheim's first-round playoff loss to the Sharks.

In an interview with Bruce Garrioch of Postmedia, Boudreau discussed the family connections he has with the Ottawa area.

“My daughter lives here, my grand-daughter who I don’t get to see too often and she’s only (18 months) and actually all my family is back East. That’s always a really compelling thing,” Boudreau told Postmedia. “Ottawa itself is compelling itself because they’ve got the opportunity to be a pretty good team and they’ve got a lot of pretty good pieces in place.”

According to Garrioch, Boudreau has already interviewed with GM Chuck Fletcher for the Minnesota Wild coaching job. Boudreau said he's been a busy man in the days since his dismissal from Anaheim.

"Since it’s last Friday it’s been pretty crazy, just with the phone blowing up, but I’ve gone through it before so I know the phone blows up a lot when these things happen,” Boudreau said.