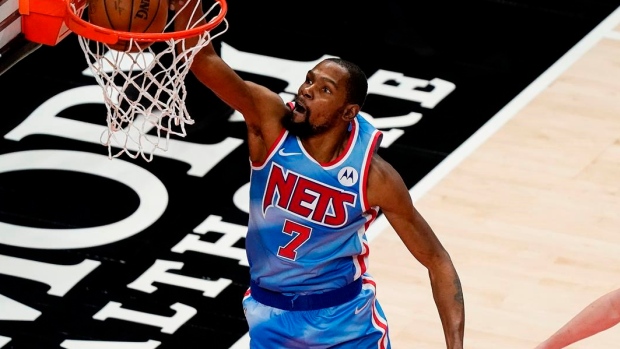 Brooklyn Nets star Kevin Durant will be eligible to rejoin the team on Friday, head coach Steve Nash told the media prior to their game against the Philadelphia 76ers.

Durant was pulled from his team's loss Friday night against the Toronto Raptors due to health and safety protocols.

According to a report by Shams Charania of The Athletic, Durant had three exposures to a team employee that has tested positive for COVID-19.  Durant continues to test negative and will have to stay in quarantine for seven days.

Durant was in a car with the team employee on three separate occasions Friday. The Nets‘ MVP candidate continues to test negative for COVID-19, sources say, as have all other Nets players and team staff. https://t.co/FbDSiypcTu

The Nets superstar did not start Friday's game against the Raptors amid reports that he was undergoing COVID-19 contract tracing. Durant checked into the game during the first quarter and remained into the third frame before being pulled for the remainder of the night reportedly because someone he interacted with that day had returned a positive COVID-19 test.

In the aftermath of Friday's events, Durant did not travel with the Nets to Philadelphia.

The rest of the Nets, however, have been cleared to play in Saturday's game against the 76ers, ESPN reports.

Following their win over the Nets on Friday, the Raptors are scheduled to take on the Atlanta Hawks Saturday night.