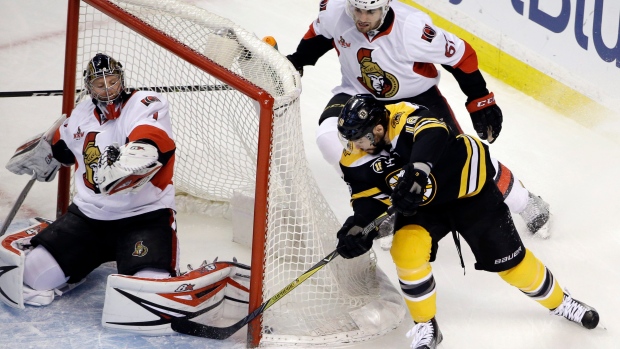 Over a month into free agency, veteran forward Drew Stafford remains unsigned and on the market, Joe Haggerty of CSN New England doesn't expect that to change anytime soon.

In a recent mailbag, Haggerty said Stafford and the Boston Bruins, who acquired him at the trade deadline in February, remain in contact, but suggests Stafford will likely have to head to a camp on a professional tryout.

Haggerty believes Stafford could serve as insurance if certain prospects can't make the NHL leap, but the Bruins should not commit a roster spot to him.

Stafford scored four goals and added four assists in 18 games with the Bruins after being acquired for a conditional sixth-round draft pick. He added two goals in six playoff games as the Bruins were eliminated in the first round by the Ottawa Senators.

In total, the 31-year-old scored eight goals and posted 13 points in 58 games with the Bruins and Winnipeg Jets.

Haggerty lists Jake DeBrusk, Zach Senyshyn, Anders Bjork and Danton Heinen as prospects who Stafford would be competing with if he spends camp with the Bruins.