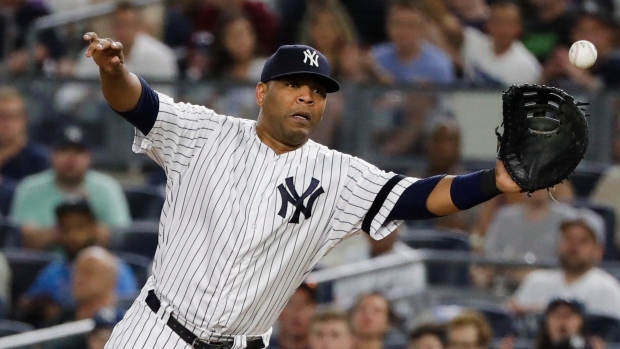 The Chicago White Sox and Edwin Encarnacion have agreed to terms on a one-year deal, according to multiple reports.

John Heyman of the MLB Network reports the deal would be worth $12 million for one year. There would be a club option for $12 million in 2021.

Encarnacion hit 34 home runs in 109 games for Seattle and the Yankees last season. The three-time All-Star led the American League with 21 homers when the Mariners dealt him to New York in June. But the Yankees declined an option for next season after he was limited by oblique problems down the stretch.

Encarnacion batted .249 with 13 homers and 37 RBIs in 44 regular-season games with the Yankees. He hit .308 while New York pounded Minnesota in the AL Division Series, but slumped badly in the AL Championship Series against Houston.

Encarnacion, turns 37 on Jan. 7, has eight straight seasons with more than 30 homers. He has 414 homers in 15 years with Cincinnati, Toronto, Cleveland, Seattle and New York.

He figures to serve as the designated hitter and play first base along with slugger Jose Abreu.

The White Sox have been loading up around a promising young core, hoping to challenge in the AL Central after seven straight losing seasons. Encarnación joins former AL Cy Young Award winner Dallas Keuchel and catcher Yasmani Grandal as big-money additions this off-season.

The White Sox were 72-89 last season, well behind the 101-win Minnesota Twins and 93-win Cleveland Indians. But they believe they are in position to make a big jump after missing the playoffs for the 13th time in 14 years since their 2005 World Series championship. That's because young players established themselves in the majors and promising prospects remain in the pipeline.

Tim Anderson led the majors with a .335 average last year. Yoán Moncada had a breakthrough season, hitting .315 with 25 homers and 79 RBIs. Eloy Jiménez showed pop as a rookie, with a .267 average, 31 homers and 79 RBIs. Prized outfielder Luis Robert figures to debut next spring, and top prospect Nick Madrigal might also be ready to get significant time at second base.