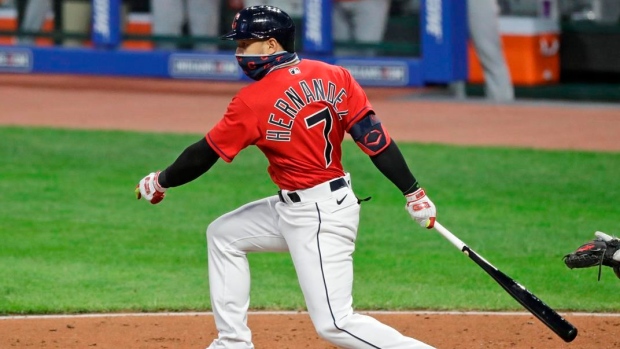 CLEVELAND — The Indians traded their All-Star shortstop. They're hanging on to their steady second baseman.

Free agent César Hernández, who had a strong 2020 season with Cleveland, has agreed to return on a one-year contract, a person familiar with the deal told The Associated Press on Tuesday.

The team and Hernández have an agreement, which includes a club option for 2022, in place and it will become official once medical tests have been completed.

Hernandez is playing in Venezuela, and it could be days before the everything is finalized, said the person spoke on condition of anonymity because the deal is still pending.

The signing of Hernández provides some stability to Cleveland's infield, which has a major hole to fill at shortstop following Francisco Lindor's trade to the New York Mets. A switch-hitter, Hernández may move into Lindor's leadoff spot in the lineup.

The Indians cleared over $30 million from their payroll in trading Lindor and starter Carlos Carrasco. And while the team won't be signing any big names, Cleveland is expected re-invest some of that money by being aggressive in going after second-tier free agents.

That's what Hernández was last winter and he ended up being a nice pickup for the Indians after he spent seven years with the Philadelphia Phillies. He signed a one-year deal worth $6.25 million.

Hernández batted .283 in 58 games and led the AL with 20 doubles in the pandemic-shortened season. He played excellent defence, committing just four errors and winning a Gold Glove for the first time.

The Indians acquired young middle infielders Andres Giménez and Amed Rosario in the Lindor deal and it was expected one of them would play second before Hernández was brought back. Now, it's not clear what the plans are for Giménez and Rosario.