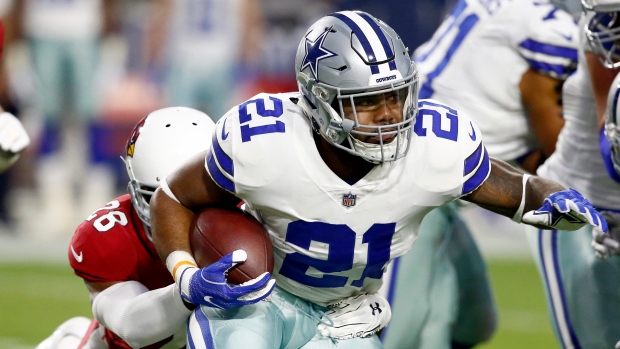 Dallas Cowboys star running back Ezekiel Elliott, who continues to hold out for a new contract, has reportedly been offered a deal by the team that would make him the second highest-paid back in the NFL, according to ESPN's Ed Werder.

Sources: The most recent offer in negotiations between holdout Ezekiel Elliott and the Cowboys came from the team. Elliott has been offered a contract making him one of the NFL’s 2 highest-paid RB. That would suggest team offering more than LeVeon Bell and less than Todd Gurley.

The Cowboys reportedly offered Elliott, along with quarterback Dak Prescott and wide receiver Amari Cooper who are also reportedly looking for new deals, contracts that would have put each within the top five highest-paid players at their respective positions.

Elliott, who has two more years remaining on his rookie contract, has stayed away from the Cowboys since training camp. Despite being near the start of the regular season, Elliott reportedly will not return to the team until he receives a new contract. The 24-year-old has led the NFL in rushing two of his three seasons in the league.

On Tuesday, the Cowboys signed linebacker Jaylon Smith to a five-year extension worth a reported $64,000,000 million.