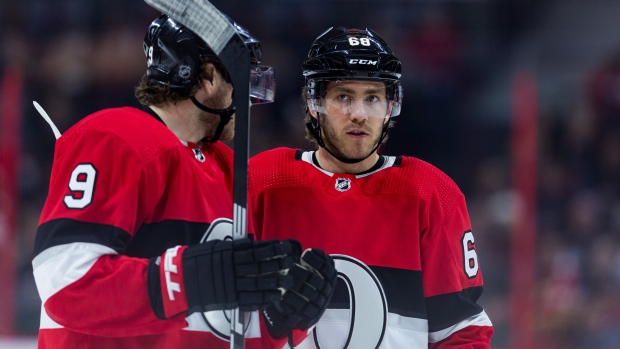 The Philadelphia Flyers were reportedly interested in acquiring Ottawa Senators winger Mike Hoffman at the trade deadline, but closed the door once they heard the asking price.

The Flyers have two first-round picks in this June's draft after trading Brayden Schenn to the St. Louis Blues last summer. Boruk reports Flyers general manager Ron Hextall may have been open to moving one of his picks, but Sanheim was not on the table.

The 21-year-old defenceman has appeared in 35 games with the Flyers this season, posting one goal and four assists. He is currently playing with the AHL’s Lehigh Valley Phantoms, and has one goal and 15 points in the AHL this season.

“We’ve got a lot of good young players and we get asked about them fairly often,” Hextall said Monday after the deadline.

Hoffman, who was not moved by the Senators, has 18 goals and 42 points in 62 games this season.

The Flyers acquired goaltender Petr Mrazek from the Detroit Red Wings on Feb. 19, but did not make any moves on Monday. Hextall said he was unfazed in his approach by moves from rivals such as the New Jersey Devils, Pittsburgh Penguins and Columbus Blue Jackets.

The Flyers currently sit second in the Metropolitan Division with 78 points in 64 games.