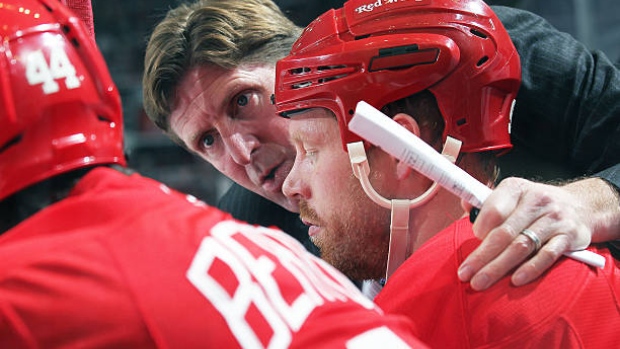 Former Red Wings forward Johan Franzen says he has suffered greatly from his interactions with former coach Mike Babcock during their time together in Detroit.

In an interview with Swedish newspaper Expressen published Monday, Franzen said his interactions with Babcock, who coached the Red Wings from 2005-15, still haunt him ­– especially an interaction he had with him during a 2012 first-round playoff series against the Nashville Predators.

“I get the shivers when I think about it, that incident against Nashville in the playoffs. It was coarse, nasty and shocking…But it was just the tip of the iceberg. It was verbal attacks. He said horrible things,” Franzen told the newspaper in translated quotes.

Babcock didn’t respond to a request for comment on Monday.

Franzen, who spent his entire NHL career with the Red Wings starting in the 2005-06 season, said the incident during the 2012 playoffs forced him to seek professional help.

“From 2011 on, I was terrified of being at the rink,” he said. “That’s when he got on me the first time. I just focused on getting out of bed every morning from that moment. Last year I could sleep naturally from the first time since then.

“The nightmares keep coming back. It was just his attacks, playing in my head each and every day.”

Franzen said he got help managing those obsessions during three weeks at a centre in Colorado last year.

The native of Sweden said in the interview that Babcock is the worst person he ever met.

“As a coach he is extremely meticulous and well prepared. He is very good at putting a team together and getting everyone to buy into it. That’s his strong side,” Franzen told the newspaper. “But then, he’s a terrible person, the worst I have ever met. He’s a bully who was attacking people. It could be a cleaner at the arena in Detroit or anybody. He would lay into people without any reason.”