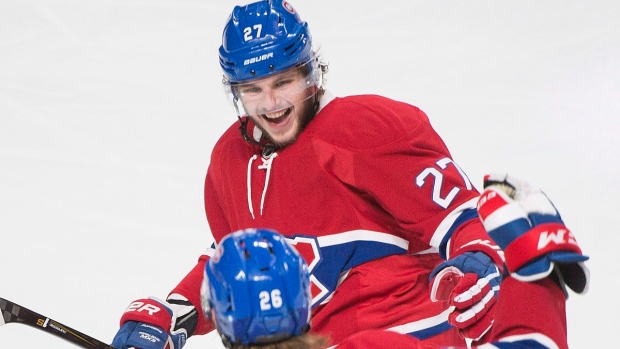 Montreal La Presse's digital edition reported that Galchenyuk's girlfriend was arrested on the weekend in a case of alleged domestic violence. La Presse Plus says the woman was freed and the file sent to Crown officials who will determine whether charges should be laid.

Galchenyuk and Smith-Pelley, also reported to be present during the incident, took part in practice and then were to meet with Bergevin.

The players were informed of the situation before practice.

"It's a personal issue between Alex and his girlfriend and it's not something we're going to talk about," said forward Brendan Gallagher. "They addressed the situation, made us aware of what was going on. It's something that's going to be handled by the parties involved."

Neither player was made available to the media after practice. Bergevin and coach Michel Therrien also did not speak with reporters.

The media report says the woman turned up at Galchenyuk's apartment on Sunday morning, a day after the Canadiens dropped a 3-1 decision to the Pittsburgh Penguins. La Presse says the woman's lawyer, Jean-Daniel Debkoski, did not want to discuss the matter.

Montreal police have confirmed they received a call from an apartment on the street where Galchenyuk lives.