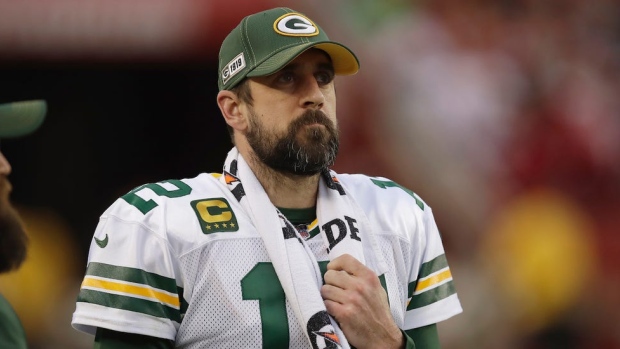 Aaron Rodgers is the reigning National Football League Most Valuable Player, but how good will he be behind the Jeopardy! podium?

The Milwaukee Journal-Sentinel's Mike Hart reports the Green Bay Packers quarterback's stint as guest host of the program will begin on Apr. 5 and last for 10 episodes.

The 37-year-old Rodgers is one of many guest hosts lined up for the show in the upcoming weeks and months. The long-running program has decided not to name a permanent host yet to replace the iconic Alex Trebek who died last November, at the age of 80, after being diagnosed with cancer. The Ottawa-born Trebek hosted the show for 37 years.

This will not be Rodgers' first involvement with Jeopardy! An avid fan of the show, Rodgers was a contestant on a 2015 Celebrity Jeopardy! episode and emerged victorious over astronaut Mark Kelly and Montreal-born Shark Tank panelist Kevin "Mr. Wonderful" O'Leary.

Among the other guest hosts currently lined up for the show are Anderson Cooper, Katie Couric and Mayim Bialik.