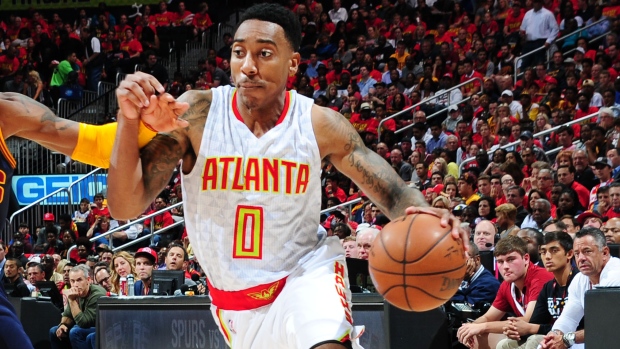 The Atlanta Hawks are sending Jeff Teague to the Indiana Pacers as part of a three-way deal that will also see George Hill go to the Utah Jazz, according to Yahoo’s Adrian Wojnarowski.

The Hawks will receive Utah’s No. 12 pick in Thursday’s draft.

Teague averaged 15.7 points per game to go along with 5.9 assists and 2.7 rebounds in 79 this past season. He has spent the entirety of his seven-career with the Hawks since being selected 19th overall in 2009.

He has started every postseason game for Atlanta over the last five seasons (45 games) and averaged a career-high 19.3 points in seven playoff games in 2013-14.

Wojnaroski is also reporting the Pacers will work on signing Teague to an extension.

Hill has been a key cog in the Pacers’ organization since being traded by the San Antonio Spurs at the 2011 NBA Draft. He has started more than 70 games in three of his five seasons in Indiana and averaged 12.1 points, 3.5 assists and 4.0 rebounds in 34.1 minutes this past season.

The Indianapolis native has also started every post-season game with the Pacers dating back to his first season with the club in 2011 (55 games).