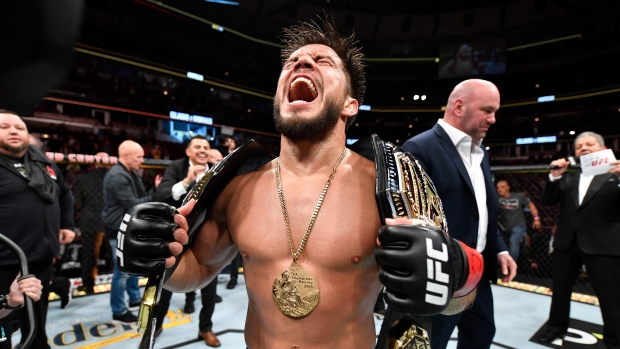 The UFC confirmed to ESPN's Ariel Helwani on Monday that Henry Cejudo is considered to be retired and has vacated the UFC bantamweight title. His name was removed from the title page and official rankings on the UFC website Sunday.

Henry Cejudo is no longer the UFC bantamweight champion, per the promotion. They have confirmed this news to ESPN. Cejudo is officially “retired” and the title is now vacant. No word yet on when the vacant title fight will take place.

Cejudo successfully defended the bantamweight belt against Dominik Cruz at UFC 249 earlier this month and announced after the bout he was retiring.

“I really do want to walk away, but money talks,” Cejudo said at the time. “It gets stagnant. I want to leave on top.”

It is unknown if Cejudo has removed himself from the USADA drug-testing pool. If he removes himself, Cejudo would not be able to return to the UFC until he puts himself back in the pool for a period of six months.

With a 16-2 record, Cejudo had not lost since 2016 and is only the fourth person in UFC history to hold titles in two different weight classes at the same time (bantamweight and flyweight). He is currently on a six-fight winning streak, which includes victories over Cruz, Demetrious Johnson and TJ Dillashaw.

The UFC has yet to announce its plan regarding a future bantamweight title fight.