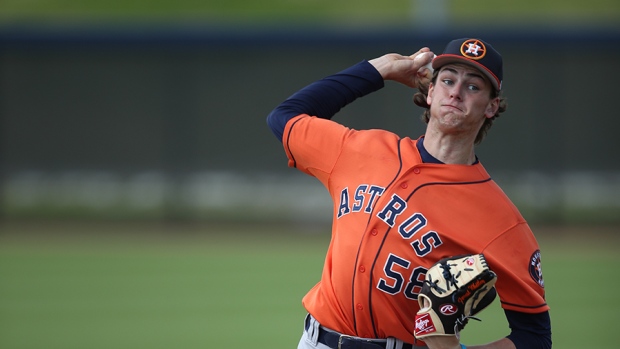 Houston Astros prospect Forrest Whitley has been diagnosed with a torn right UCL according to Bob Nightengale of USA Today.

Forrest Whitley, who just a few years ago was the No. 1 pitching prospect in #MLB, has been diagnosed with a right UCL strain in the latest injury of his promising career. Whitley, the #Astros No. 1 pick in 2016, was being counted on to be part of the Astros rotation this summer.

Jon Heyman of the MLB Network reports Tommy John surgery has been recommended.

Whitley was one of the most promising pitching prospects in baseball just a few years ago but has had his career derailed by injuries.

A first-round pick in 2016 (No. 17 overall), Nightengale reports that Whitley was projected to be a member of the Astros' starting five this summer.

He had a 7.99 ERA in 18 minor league appearances split across four different levels in 2009.

The 23-year-old is a native of San Antonio.