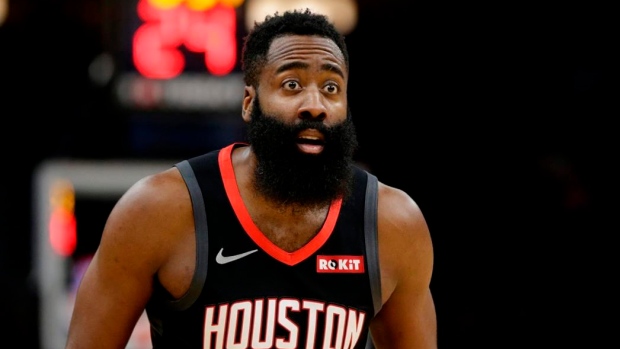 James Harden missed 27 shots in last night's loss, but there's at least one miss that shouldn't have counted.

With the Houston Rockets up by 13 mid-way through the fourth quarter Tuesday night against the San Antonio Spurs, Harden threw down a breakaway dunk that would have put the Rockets up by 15. Except when Harden stuffed the ball through the rim, the ball was bizarrely caught up in the mesh and wrapped itself around the hoop. Although the ball clearly went through the hoop, the basket was not counted. It proved costly as the Rockets went on to lose 135-133 in double overtime.

According to ESPN's Tim MacMahon, the Rockets are hopeful the NBA office will take action and either award the win to Houston or have the final near eight minutes replayed at a later date. MacMahon adds that league sources "scoffed" at the idea Houston would be awarded the win retroactively.

MacMahon also reports the team is prepared to file a protest but believe such a step won't be necessary.

While officials ruled the ball did not clear the hoop and even denied Rockets head coach Mike D'Antoni the chance to challenge the call, crew chief James Capers said after the game “in fact it did clear the net and should have been a successful field goal.” In theory, if Harden's dunk was counted, overtime would not be required and the Rockets would have won 117-115.

"As to could the play have been reviewed, it is a reviewable matter, but you have a window of 30 seconds to challenge the play during that timeout that he had and while they were protesting the call, trying to get clarification of it, that window passed. So therefore, it elapsed, and they were not able to do it," Capers told ESPN.

D'Antoni had a different explanation of why he was unable to challenge the call.

"I heard that they said the ball hit James and went back through, so it was a goaltend on [Harden]. I challenged that, and I didn't get a response. Then another guy said it wasn't a goaltend; it went out of bounds on us. And I said, 'Well, I challenge that.' Can't do that. You know, I don't know, to answer your question. I've got nothing. I can't tell you."

According to ESPN Stats and Information, 2008 was the last time part of a game was replayed. The Miami Heat and Atlanta Hawks were forced to redo the ending of a game four months later after it was ruled Shaquille O'Neal did not foul out of a game in which he was sent off from. The two teams met the next time they were scheduled to play and the Hawks ultimately came away with the win.

If the league decides to re-play the tail end of the game, the next time the two teams meet is on Dec. 16 but at the Toyota Center in Houston. Tuesday's game took place in San Antonio.

Despite getting the short end of the stick, the Rockets still blew a 22-point lead. That didn't sit well with D'Antoni.

"We just quit playing defence, we quit getting back, we turned it over silly and didn't get back. They got hot, made shots and we just didn't do anything to combat it."

Harden finished with 50 points in the game and was 11-of-38 from the field but did go 24-of-24 from the free throw line. Point guard Russell Westbrook struggled even more from the field, going 7-of-30 for a total of 19 points. With the loss, Houston drops to 13-7.