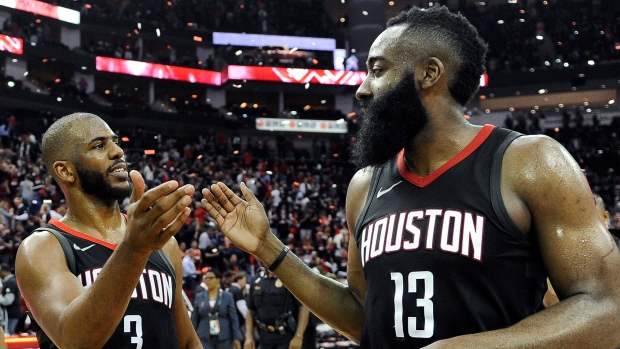 Things don't look good for the Houston Rockets at the moment.

According to a report from Yahoo's Vincent Goodwill on Tuesday, the relationship between guards Chris Paul and James Harden is "unsalvageable."

According to the report, Paul asked Rockets management to trade him and Harden issued a "him or me" edict following a second round loss to the Golden State Warriors.

Goodwill writes that the two players barely spoke to each other during the season and Harden has not returned Paul's attempts at communicating in the off-season. There also seems to be a lack of respect for one another from both players, the report details.

Despite Paul's rumoured request, his contract would be difficult to move as he is owed $38.5 million, $41.3 million and $44.2 million in each of the next three seasons.

Paul has since refuted Goodwill's report, writing "Damn! That's news to me...," in the comments section of a Bleacher Report Instagram post about the topic. Rockets general manager Daryl Morey also refute the report, commenting "news to me as well underneath Paul's comment.

And now Daryl Morey has chimed in. pic.twitter.com/qEla7WEEgB

According to Houston Chronicle Rockets beat reporter Jonathan Feigen, Morey said Paul and his reps have never asked for a trade and that Paul will be a Rocket next season. Morey, per Feigen, also said that guards do not have issues with one another and that he has spoken to both often this off-season about free agency plans.

Couple things: Paul shares his thoughts, often pointedly. Rockets have never made a secret of that, as if they could. And he is good with taking it back. Tucker gets in his face, too. It's what they do. Second, FWIW, Harden/Paul sit next to one another, play cards on the charter.

Morey gave an example: Said he had Harden and Paul on face time with him as they discussed 50 free agents together. Said he has spoken to both players quite a few times since the season with no indications either has changed their stance. https://t.co/bnBJH6zt0J

Rumours of a feud between the two guards is nothing new and Morey addressed the situation on Monday.

"We have two high level competitors, Chris and James, who their only goal in life at this point is to win the title ... I think it's good that there is tension in the sense that we all want to win," the GM said.

I'm frustrated, our top players are frustrated, [head coach] Mike D'Antoni is frustrated. We want to take the last step and be the champion and I think it's good that there is tension in the sense that we all want to win."

The Rockets finished at 53-29 to place fourth in the Western Conference but fell to the Warriors in six games in the second round despite the injury to Kevin Durant in Game 5 that knocked him out for the series. Houston was also bounced by Golden State the year before in Game 7 of the Western Conference Finals.