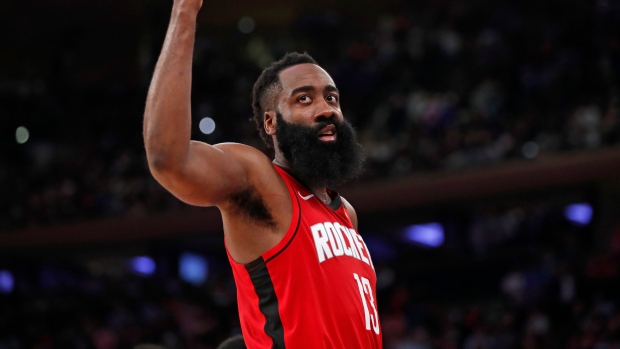 It appears the James Harden situation is getting ugly in Houston.

According to The Athletic's Shams Charania, Harden had multiple verbal confrontations with teammates in practice on Sunday and Monday. One of those incidents involved Harden throwing a ball at Rockets rookie Jae'Sean Tate during a "heated exchange." While the ball did not hit Tate, Charania writes this could be a culmination of frustration from a usually laid back superstar.

The three-time NBA scoring champion reported to Rockets camp one week late on Dec. 8 after pushing for a trade out of Houston according to multiple reports. The Brooklyn Nets, Philadelphia 76ers, Miami Heat and Milwaukee Bucks are believed to be among Harden's preferred destinations. Charania reports Harden had originally planned on keeping things professional but "the environment has gotten tense around the team in recent days."

While things appear choppy off the court, Harden has averaged 16 points per game on just over 24 minutes in two pre-season games. Charania adds that Harden has been engaged and encouraging to his teammates on game nights.

Charania reports the Rockets do not plan to give away Harden and are operating with no sense of urgency, seeking a flurry of assets in any potential trade. The 31-year-old has averaged at least 30 points per game in each of the past three seasons.

“My expectation never changes — individually be the best basketball player in the world,” Harden told reporters. “As a team try to get in the top three seeds and then always give yourself a chance (in the playoffs). That’s the most important.”

The Rockets open the 2020-21 campaign on their home floor against the Oklahoma City Thunder.