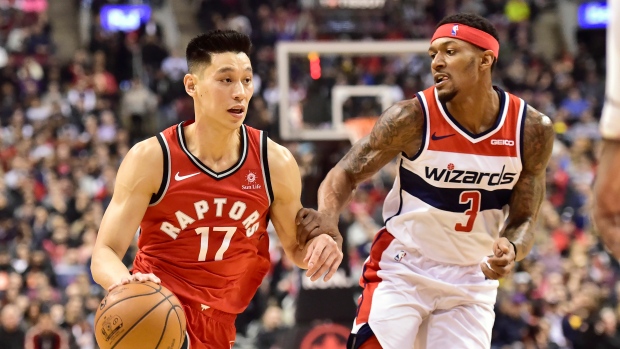 Jeremy Lin appears to be headed to the Chinese Basketball Association.

According to Sportando’s Sonx Xiang, Lin is in "advanced negotiations" with the Beijing Ducks.

Lin said earlier this summer that he had received little interest from NBA clubs during free agency despite winning the first championship of his career with the Toronto Raptors.

"Free agency has been tough cause I feel like in some ways, the NBA has kind of given up on me," Lin said while speaking in Taiwan in July.

“Rock bottom seems to be getting more and more rock bottom for me.”

Since his famed 35-game run with the New York Knicks in 2012, Lin has played for six different NBA teams.

Last season, Lin was waived by the Atlanta Hawks but signed with the Raptors mid-season following an injury to point guard Fred VanVleet. Lin averaged seven points per game on 37.4 per cent shooting with the Raptors in 23 regular season games, but played only a touch over 27 minutes total in the playoffs.

Best known for 'Linsanity,' Lin took over as the Knicks' starting point guard in February of 2012 with the team struggling and led the way to a seven-game win streak where he averaged 24.4 points per game. Lin's historic run reached its peak when he drilled a game-winner at the buzzer in Toronto against the Raptors, giving New York their sixth straight win.

He averaged 14.6 points per game that season and signed with the Houston Rockets later that summer.

The Harvard alum has played for eight different teams over the course of his NBA career that began in October of 2010.