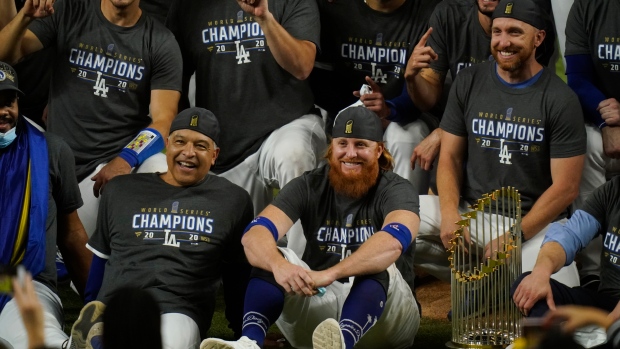 As the Dodgers celebrated their first World Series title since 1988, word broke over FOX's telecast that Dodgers third baseman Justin Turner had tested positive for COVID-19 mid-game. The news was confirmed shortly after by commissioner Rob Manfred.

As the Dodgers continued to celebrate, Turner – who was pulled from Game 6 in the eighth inning after Los Angeles learned of his positive test – made his way back onto the field to join his teammates.

According to The Athletic's Ken Rosenthal, "league security personnel and some Dodgers officials" spoke with Turner and asked him to remain in isolation. But Turner refused and "was adamant about wanting to join the celebration," Rosenthal writes, adding that he did have support from some club officials to head back to the field.

The third baseman initially wore a mask but removed it to take pictures with his team, family and the World Series trophy. He was also seen hugging and high-fiving teammates.

“I haven’t seen the pictures. I totally understand the question. If there are people around him without masks, that’s not good optics at all," Dodgers president Andrew Friedman told reporters after the game.

"But I think from our standpoint, I think the people who were around him were the people that would be in the contact tracing web anyway, which is how closely a lot of us have been around each other. Now, I think subsequent tests we’re going to take are really important to figure out what we do and to make sure any of us that are potentially positive do not spread it to other people.”

Friedman added that testing and contact tracing will take place in the days ahead.

After Manfred confirmed his positive test, Turner issued a tweet saying he was feeling good and symptom free.

Thanks to everyone reaching out! I feel great, no symptoms at all. Just experienced every emotion you can possibly imagine. Can’t believe I couldn’t be out there to celebrate with my guys! So proud of this team & unbelievably happy for the City of LA#WorldSeriesChamps

"Just experienced every emotion you can possibly imagine. Can't believe I couldn't be out there to celebrate with my guys!" he wrote before returning to the field.

Turner had support from some of his teammates to join in the celebration.

“That man, more than anybody, deserves to take a picture with that trophy, celebrate with us, have his family around and enjoy this moment. That got taken away from him, and that’s just not right. That doesn’t sit well with me," shortstop and World Series MVP Corey Seager told reporters.

Turner joined L.A. in 2014 and is the third-longest tenured Dodger behind Clayton Kershaw and Kenley Jansen. He has been one of the most consistent hitters in the Dodgers' lineup since then, hitting .302 with an .886 OPS over those seven seasons.

Turner is scheduled to become a free agent this off-season.