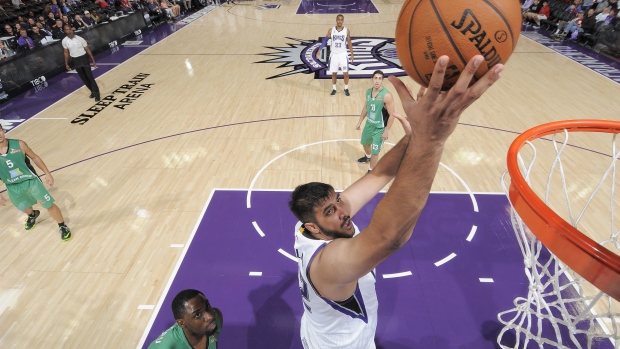 Sim Bhullar and the Sacramento Kings are about to make NBA history.

The Kings are signing Bhullar to a 10-day contract that will make him the league's first player of Indian descent, a person with knowledge of the deal said Wednesday. The person spoke to The Associated Press on condition of anonymity because the Kings are not expected to announce Bhullar's deal until Thursday, when David Wear's 10-day contract expires and a roster spot opens up.

The 7-foot-5, 360-pound Bhullar is being called up from the team's NBA Development League affiliate, the Reno Bighorns. The 22-year-old centre will be on the roster Friday when the Kings host the New Orleans Pelicans.

Sacramento is intrigued by Bhullar's size and heritage. Kings owner Vivek Ranadive is the NBA's first Indian-born owner and is trying to expand the league's presence in his native country.

When the Kings announced in August that Bhullar would compete for a roster spot in training camp, Ranadive called India the NBA's "next great frontier." He said Bhullar "represents one of many that will emerge from that region as the game continues to garner more attention and generate ever-increasing passion among a new generation of Indian fans."

The Kings consider Bhullar a project, albeit a large and unfinished one. He has worked on his conditioning and keeping up with the pace of the professional game, which remains an issue, but he has shown spurts of being a valuable presence in the middle.

In his last game Tuesday night, Bhullar had 19 points, 15 rebounds and five blocks in Reno's 131-105 win over Bakersfield. He played 38 minutes.

Antonio Gonzalez can be reached at: www.twitter.com/agonzalezAP