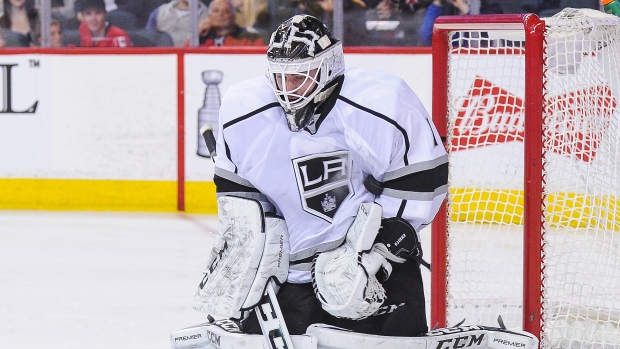 The Toronto Maple Leafs' search for a backup goaltender to the newly acquired Frederik Andersen could be at its end.

Swedish outlet Expressen's Johan Svensson reports the team is nearing a deal with Jhonas Enroth. The 28-year-old Swede spent last season with the Los Angeles Kings, backing up Jonathan Quick. He appeared in 16 games, going 7-5-1 with a goals against average of 2.17 and a .922 save percentage.

Enroth was originally taken with the 46th-overall pick in the 2006 National Hockey League Entry Draft by the Buffalo Sabres. After nearly five seasons with the Sabres, Enroth was shipped to the Dallas Stars at the 2015 trade deadline.

In 147 career NHL games, the Stockholm native is 50-66-15 with a 2.80 GAA, .911 save percentage and seven shutouts. Enroth has represented Sweden internationally on a number of occasions, including as part of the gold medal-winning team at the 2013 IIHF World Championship and the team that captured silver at the 2014 Sochi Winter Olympics.

The Leafs also have goaltenders Garret Sparks and Antoine Bibeau under contract.