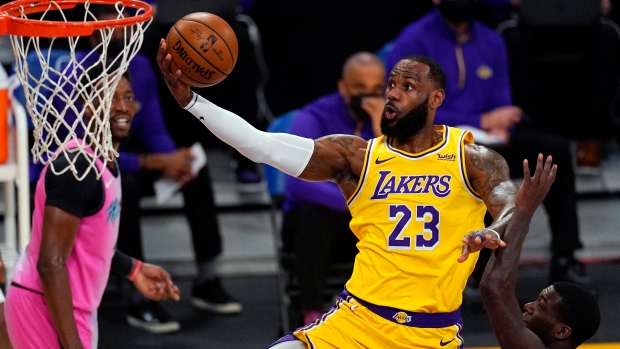 It looks like LeBron James is on the verge of returning.

According to ESPN's Adrian Wojnarowski, there is more optimism on the state of James' right ankle after on-court work Sunday and Monday and he is likely to make his return as the New York Knicks take on the Los Angeles Lakers Tuesday night at Staples Center.

Much more optimism on state of LeBron James’ right ankle after on-court work Sunday and Monday, sources tell ESPN. James was pain-free after several days off – and able to make hard cuts and elevate. Return on Tuesday vs. Knicks is likely. https://t.co/UTXIC1V0Vh

Wojnarowski reports that after several days off, James was pain free and able to make hard cuts and elevate without issue.

James originally made his return after a 20-game absence on April 30 against the Sacramento Kings. He also played two days later against the Toronto Raptors but sat out the next four contests as the ankle continued to give him problems.

James' Lakers currently sit seventh in the Western Conference and are at risk of finishing below the top six. Currently one game behind the Portland Trail Blazers for sixth and two back of the Dallas Mavericks for fifth, the Lakers would be forced to qualify for the opening round of the playoffs via the play-in format if things end up as they currently stand.

The Knicks head into Tuesday's showdown sitting at fourth place in the Eastern Conference and fresh off a win over Kawhi Leonard and the Los Angeles Clippers Sunday afternoon.