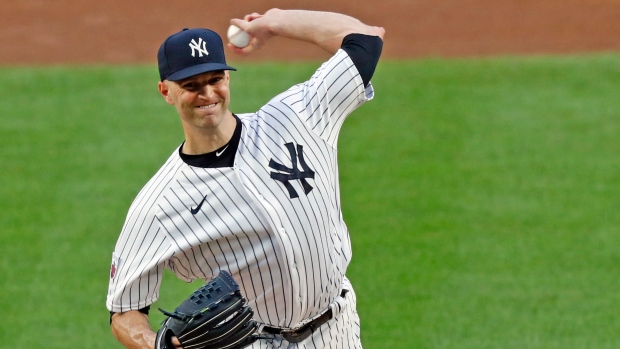 MINNEAPOLIS — The Minnesota Twins and veteran starting pitcher J.A. Happ agreed Wednesday to an $8 million, one-year contract, according to a person with knowledge of the deal.

The person confirmed the agreement to The Associated Press, speaking on condition of anonymity because the team had not announced it.

The 38-year-old Happ spent the past 2 1/3 seasons with the New York Yankees. Acquired from Toronto at the 2018 trade deadline, the left-hander went 7-0 with a 2.69 ERA in 11 starts down the stretch to finish 17-6. The Yankees then rewarded him with a $34 million, two-year contract.

Happ will be just the second off-season addition by the Twins, who also added relief pitcher Hansel Robles to the team that has won the AL Central division in each of the last two years. Jake Odorizzi and Rich Hill became free agents, creating openings in the rotation behind José Berríos, Kenta Maeda and Michael Pineda. Minnesota was third in the AL in 2020 with a team ERA of 3.58.

Happ went 12-8 in 2019 and struggled at the start of the pandemic-delayed 2020 season, prompting the Yankees to skip his turn. Happ gained strength as the year went on and finished with a 2-2 record and 3.47 ERA in nine starts. His $17 million option originally would have become guaranteed with 27 starts or 165 innings, but the threshold was reduced to 10 starts with the shortened season. He fell one short.

Happ followed Deivi García as an opener in Game 2 of the AL Division Series for New York and gave up two-run homers to Mike Zunino in the second inning and Manuel Margot in the third of the 7-5 loss to Tampa Bay. Happ said after the game he would have been more comfortable starting.