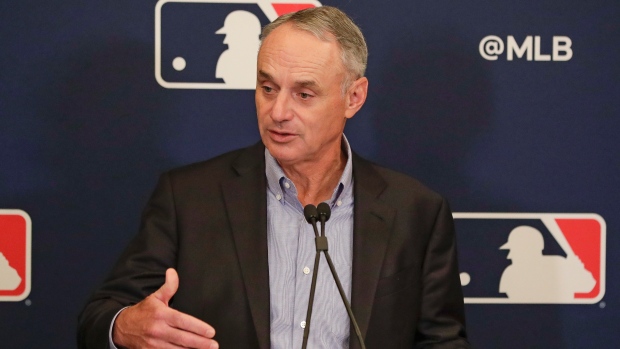 Major League Baseball owners approved a plan on Tuesday that will be sent to the MLBPA and open negotiations between the two sides regarding the economics of a possible shortened season in 2020 according to USA Today's Bob Nightengale.

“We made a proposal to the union that is completely consistent with the economic realities facing our sport. We look forward to a responsive proposal from the MLBPA," the league later said in a statement.

But it doesn't appear the two sides are close.

According to The Athletic's Ken Rosenthal and Evan Drellich, the union is very disappointed with the proposal, calling the cuts "massive." The league also reportedly proposed sharing more playoff revenue but those dollars are small compared to what players would give up, the union believes.

The MLBPA is very disappointed with MLB’s economic proposal today, source tells me and @Ken_Rosenthal, calling additional cuts proposed “massive." League offered to share more playoff revenue, but on balance, those dollars are small compared to what players give up, PA believes.

In March, the two sides agreed to an economic framework that would see players get their full prorated salaries relative to games played, but the league believes that agreement was not intended to be used if fans were not able to attend games.

Originally, multiple reports stated the MLB was preparing to offer the union a 50-50 revenue sharing split but both MLBPA head Tony Clark and superagent Scott Boras said such a proposal would be shot down immediately since the union believes restricting player salaries based on league earnings could open the door to a salary cap down the road. Nightengale adds this proposal was never officially offered.

There is no official deadline for negotiations to be completed but if the league wants to open its season -- should it be safe to do so -- in early July, the clock is ticking.

Opening Day was originally scheduled for March 26 before the coronavirus pandemic halted the start of the season indefinitely.