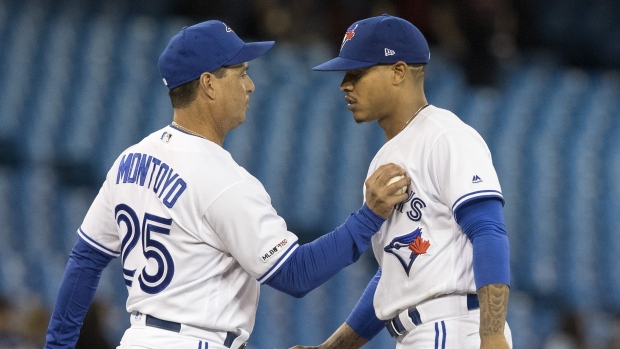 The Toronto Blue Jays may have set the pitching market with their trade of Marcus Stroman on Sunday and it appears other sellers are not happy about it.

According to Andy Martino of SNY, other teams looking to move pitchers are "very annoyed" at the Blue Jays return and are questioning why the team accepted the deal from the New York Mets four days before Wednesday's deadline.

teams can’t understand why the Blue Jays made what looks to the industry a deadline desperation trade several days before the deadline.

Martino reports that that one rival called the Blue Jays return of Anthony Kay and Simeon Woods Richardson "dogs***."

TSN Blue Jays reporter Scott Mitchell wrote Sunday that the initial reaction around baseball was the return for Stroman was a "tad light," since neither pitcher acquired is considered a top 100 prospect. He added a source confirmed the Blue Jays front office liked both players more than the industry consensus.

Several pitchers are believed to still be on the trade block ahead of Wednesday's deadline, including potentially Madison Bumgarner, Noah Syndergaard, Trevor Bauer, Mike Minor and Robbie Ray.

The Blue Jays, meanwhile, may not be done yet with Mitchell reporting that Aaron Sanchez is drawing interest as a reliever ahead of the deadline.