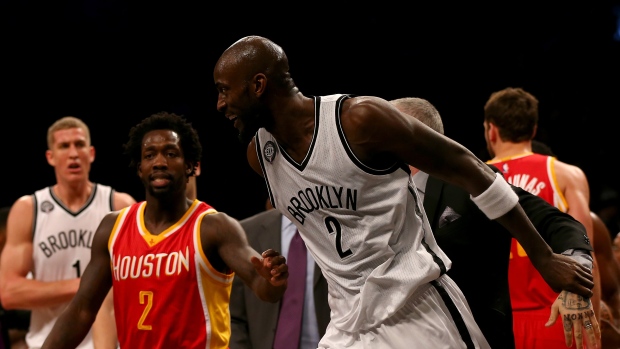 MINNEAPOLIS - The Timberwolves and Brooklyn Nets are discussing a deal that would bring Kevin Garnett back to Minnesota, the place where his brilliant career began and to the franchise that he put on the map.

The two teams had exploratory talks on Wednesday, one day before the NBA's trade deadline, a person with knowledge of the discussions told The Associated Press. The person requested anonymity because no deal has been agreed upon.

Garnett spent his first 12 years in Minnesota and was coached for much of that time by Flip Saunders, who made his own return to Minnesota before last season and is now the president of basketball operations and coaches the rebuilding team. Garnett was traded to Boston in 2007, won a championship and made two NBA Finals appearances with the Celtics.

He has spent the last two seasons languishing in a reduced role on the Nets, one of the league's biggest disappointments.

Garnett is in the final year of a contract that pays him $12 million this season and has a full no-trade clause, giving him all the leverage in this situation. He is notoriously resistant to change, especially in the middle of a season, and it remains unclear if he would uproot his family to come and play for the team that has the worst record (11-42) in the Western Conference.

But Garnett remains beloved in the Twin Cities, receiving thunderous standing ovations every time he returns to the Target Center. And the prospects of perhaps finishing his career wearing that familiar No. 21 on his back and playing in front of fans he always held close to his heart could appeal to him.

At 21-29, the Nets are still in the hunt in the muddled Eastern Conference. But their prospects of actually being competitive in the playoffs are slim, and if Garnett does relocate, he may want to seek out a team that is ready to contend for a championship.

Saunders, who also owns a portion of the team, continues to sing Garnett's praises years after the pairing parted. Saunders often references Garnett's development from a straight-out-of-high-school lottery pick in 1995 into one of the most versatile and intense power forwards the league has ever seen when talking about the plan to bring along current youngsters Andrew Wiggins, Zach LaVine, Gorgui Dieng and Shabazz Muhammad.

But the Wolves would likely have to give up forward Thaddeus Young in the deal to make the salaries match up, and team executives are still mulling whether to move a 26-year-old starter in his prime for 30 games of Garnett. After a slow start to the season that included enduring the sudden death of his mother, Young has started to play much better since Ricky Rubio, Nikola Pekovic and Kevin Martin returned from long injury absences. He is also a trusted veteran and valued voice in the locker room.

The pluses for the Wolves would include having one of the NBA's hardest workers in Garnett set a tone for the promising young nucleus on this roster and perhaps pave a way for Garnett to join the ownership group when he retires. Moving Young would also free up some cap space for next season as he has a $10 million player option for next season that he is likely to exercise.