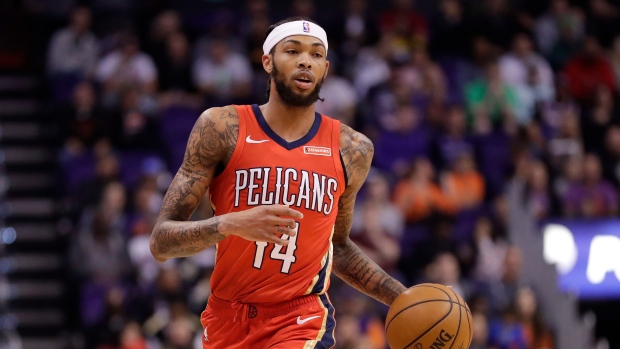 Ingram's agents, Jeff Schwartz and Jordan Gertler of Excel Sports Management, confirmed the deal on Tuesday to The Associated Press.

Ingram is the NBA’s reigning most improved player after averaging a team-high 23.8 points in his first season with the Pelicans.

The 23-year-old Ingram, a 2016 second overall draft choice by the Los Angeles Lakers, was dealt to New Orleans during the 2019 off-season as part of a blockbuster trade that sent perennial All-Star Anthony Davis to the Lakers. New Orleans also received guards Lonzo Ball and Josh Hart, as well as multiple draft picks in that deal.

The 6-foot-7 Ingram this season developed into an effective and reliable scorer from the perimeter as well as on dribble drives. He shot a career best 39.1% from 3-point range but also routinely finished above the rim in the free-flowing, up-tempo offence the Pelicans ran last season under previous coach Alvin Gentry.

Now Ingram will play for new coach Stan Van Gundy, who said shortly after his hiring that viewed Ingram and Pelicans 2019 top overall draft choice Zion Williamson “two of the most unique young guys in the entire league.”

“There’s just a lot to build around there,” Van Gundy said.

This past season represented a personal triumph for Ingram on multiple levels.

Not only did he begin to fulfil the potential he was widely believed to possess when he turned pro after starring at Duke, but he also made it through virtually an entire season after his last season with the Lakers had been cut short by a blood clot.

His decision allows him to continue to develop his game alongside Williamson and Ball.

The Pelicans this off-season also have made trades to acquire 7-foot centre Steven Adams and guard Eric Beldsoe.