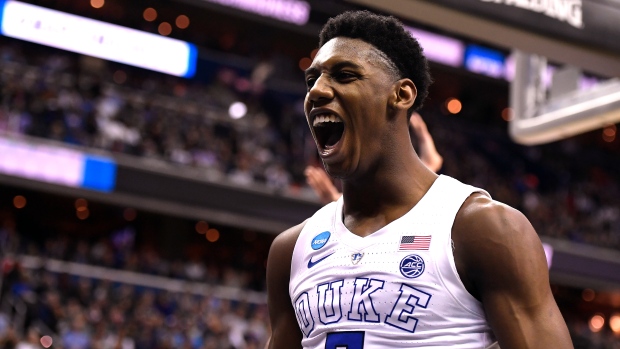 It appears that Canadian college star RJ Barrett will get his wish of playing for the New York Knicks.

According to ESPN's Adrian Wojnarowsk, despite the Knicks working out Vanderbilt guard Darius Garland on Wednesday, the team remains "locked on selecting" Barrett with the third overall pick in Thursday's draft.

Normally, incoming players like Barrett usually work out for several teams during the pre-draft process, but the Mississauga native only worked out for the Knicks. Of his workout with the Knicks, Barrett said it "went very well."

"It was just the way it worked out," he said. "The Knicks are definitely the place I want to be so I won't be working out with anybody else."

Barrett, 19, led the Atlantic Coast Conference at 22.6 points to go with 7.6 rebounds and 4.3 assists as a one-and-done player with the Duke Blue Devils this past season. He was named an Associated Press first-team all-American with an ACC single-season freshman scoring record with 860 points — the second best total by any player in Duke History.

The record for the most Canadian ever taken in the first round and overall in an NBA draft are three and four, respectively, set in 2014 with Andrew Wiggins of Vaughan, Ont. (No. 1 overall by Cleveland), Nik Stauskas of Mississauga, Ont., (No. 8 by Sacramento), Tyler Ennis of Brampton, Ont., (No. 18 by Phoenix) were all picked in the first round, and Dwight Powell of Toronto was selected with the 45th pick by Charlotte in the second round.