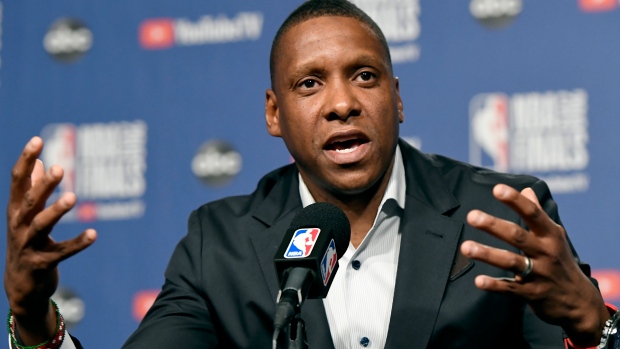 The New York Knicks have been a disaster so far this season.

Not only are they 2-8 through their first 10 games, they've lost three of their last four games by 20 points or more. Their opponents haven't exactly been tough either, losing handily to the Sacramento Kings (113-92), Detroit Pistons (122-102) and Cleveland Cavaliers (108-87) all within the last eight days. Outside of an impressive win over Kristaps Porzingis and the Dallas Mavericks Saturday night, the Knicks have not won since Oct. 28.

The Athletic's Frank Isola reports Knicks owner James Dolan has had enough of the team's struggles and might have a plan to stop the bleeding.

"According to several people familiar with the Knicks thinking, Dolan is plotting to take another run at Toronto Raptors president Masai Ujiri," Isola wrote Monday.

The report adds several NBA executives and scouts in New York for last week's college basketball doubleheader at Madison Square Garden were "linking Ujiri to the Knicks" despite him being under contract with the Raptors until 2021 and coming off an NBA championship.

Isola also writes that as of last week, the Knicks' plan was to give head coach David Fizdale, general manager Scott Perry and team president Steve Mills the season to figure things out, but "things change quickly in Dolan's world."

I can say this with confidence, the Masai Ujiri I know will never work for James Dolan, ever, under any circumstance. But, sure, lure away Knicks.

TSN's Josh Lewenberg notes that it is highly unlikely Ujiri would want to work for Dolan.

After the Knicks' lopsided loss to the Cavs at home Sunday night, Mills and Perry took the unusual step of addressing the media.

"Obviously, (GM) Scott (Perry) and I are not happy with where we are right now," Mills told reporters. "We think the team is not performing to the level that we anticipated or we expected to perform, and it's something that we collectively have to do a better job of delivering the product on the floor that we said we would do at the start of this season."

“We have patience and we believe in coach but we also need to find a way to have a consistent level of play and effort,” he added.

According to ESPN's Adrian Wojnarowski and Malika Andrews, Mills has been laying internal groundwork for the eventual dismissal of Fizdale as head coach.

The Knicks will look to turn things around Tuesday night in Chicago against the Bulls.